It’s up to them to stop adding retiree debt 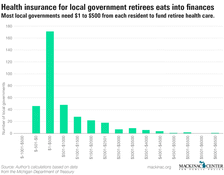 Most local governments need to spend up to $500 per resident to satisfy the costs of their retirees’ health insurance.

It’s often been said that you get the government you pay for. This breaks down, however, when our government managers push the costs of yesterday’s government onto today’s taxpayers. One way they’ve done this is by offering medical insurance to government employees and deferring its costs.

Government managers have offered in the past to keep employees on their medical insurance once they retire. The managers may continue to do so, but they also reserve the right to end coverage at any time. Meanwhile, they aren’t setting aside money to pay for future payments they can anticipate.

Creating retiree health care benefits whose costs get kicked onto future taxpayers was a mistake and a terrible financial practice engaged in by the bulk of our governments.

That’s not a good situation for either employees or residents. Employees have no certainty that they can count on their employers continuing this practice once they reach retirement age. Residents, meanwhile, are on the hook for services rendered long ago.

The state has already moved its state and school systems — which cover over half of all government employees in Michigan — to an approach in which benefits are paid as they are earned. New employees get a supplemental savings account to help pay for health insurance upon retirement and a boost to their retirement savings plans. In addition to changing its approach to retirement, the state has started setting aside money to pay for health benefits for legacy employees and current retirees. (State employees hired before Jan. 1, 2012, and school employees hired before Sept. 4, 2012, are considered legacy employees.)

Local governments have a problem, however. The Michigan Treasury Department gathered data on 363 of the state’s general purpose governments — cities, villages, charter townships and counties. There are 46 governments — 13 percent of the total — that either did not offer retiree health insurance benefits to their employees or have set aside enough money to pay for them. The other 87 percent offer health benefits to retirees but have not saved enough money.

It would take $9 billion for those local governments to pay for the current benefits in place for employees and retirees, though the problem is more severe in some places than in others.

If governments were required to set aside enough money today to address this problem, the median cost would be only $306 for each of their residents. But there are a handful of basket cases. In River Rouge it would cost each resident $6,500 to pay off these benefits, and there are 48 governments where it would take $2,000 for each resident to set aside enough money to do the same.

And Oakland County, home to 1.2 million people, deserves credit for having set aside enough money to pay for the benefits it offered.

The governments that have not set aside enough money ought to reconsider the benefits they offer. These are not strict financial liabilities. Governments can generally rescind them at their discretion. Creating retiree health care benefits whose costs get kicked onto future taxpayers was a mistake and a terrible financial practice engaged in by the bulk of our governments. It is a disservice to residents. And this is especially the case when everyone who gets those benefits is covered by Medicare in the first place.

Local officials have nobody to blame but themselves. No state mandate compels them to offer these benefits, and nothing requires them to kick the costs of today’s services onto future taxpayers. On the other hand, many of them have followed the state in offering to new employees benefits whose costs won’t get pushed onto future taxpayers.

Local officials can get themselves out of this problem by requiring that employees contribute more to pay for these benefits, changing the generosity of these plans and setting aside more money to pay for any remainder.