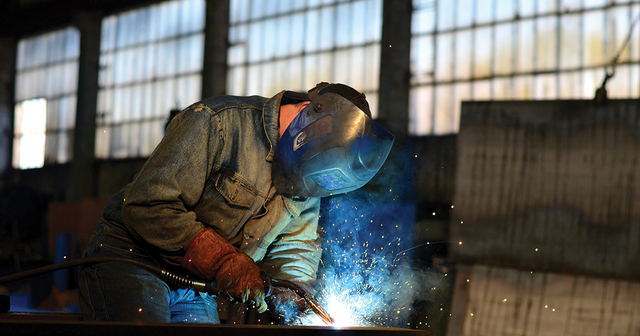 The state requires people to get a license to work in more than 160 occupations, including skilled construction and labor jobs that are popular among ex-offenders.
Publications / Viewpoints

Ex-Offenders Are Closing the Gap

The Michigan Department of Corrections plans to expand its unique Vocational Village, an in-prison, skilled trades program that’s had remarkable success in helping ex-offenders land jobs. That’s good news for the pool of inmates who are on a waiting list for the program. But it’s also good news for Michigan residents in general, as steady employment is a key factor in reducing an ex-offender’s likelihood of relapsing into criminal behavior. Michigan, in fact, should do more to help inmates so that they will be able to earn an honest living after they serve their time.

Even if cyber schools’ costs for facilities are less, they, unlike brick-and-mortar districts, have to pay for them out of their state revenue — the same revenue Snyder plans to cut.

The Vocational Village is a specialty housing unit and training facility located at the Richard A. Handlon Correctional Facility in Ionia. It’s touted by the Corrections Department as an in-prison career and technical education program, the first of its kind. The goal is to create a place for prisoners who are serious about improving their lives. Participants must meet certain criteria, such as getting a GED, maintaining a record of good behavior and being eligible for parole in the near future. The program’s 224 participants live and work together and learn in-demand job skills.

Companies that hire parolees report that they make talented, motivated employees, meaning that a program such as the Vocational Village could become popular not only inside prison walls but outside them.

The department is working on creating another Vocational Village in Jackson, using some of the $2 million that the Legislature added to its budget last year. The new facility will have new career tracks, including auto tech and robotics. The department wants to open a third village, this time at the women’s prison in Ypsilanti.

The state of Michigan incarcerates over 45,000 people, and as Gov. Rick Snyder has pointed out, most of them will someday return to society. Unfortunately, ex-offenders in Michigan return to prison at a higher rate than those elsewhere. But there’s a growing interest among policymakers and the public in slowing down the revolving door of Michigan’s prisons and helping ex-offenders successfully integrate into society.

A major obstacle, though, is the fact that having a criminal history can make landing a steady job extraordinarily difficult. If employers know a potential employee has been convicted of a crime, they frequently decline to hire him — sometimes even if the offense was minor and completely unrelated to the nature of the job. And if ex-offenders lie about their past to get the job, they are inevitably fired when their employer finds out.

There’s nothing inherently wrong with employers behaving this way. Most are operating in competitive markets and have to be mindful of the costs and risks that come with hiring employees. Nevertheless, it makes the road back to society for ex-offenders more difficult.

But that’s just one part of the challenge ex-offenders have in finding gainful employment. The other pressing concern is the state’s overly burdensome and arbitrary occupational licensing laws. The state requires people to get a license to work in more than 160 occupations, including skilled construction and labor jobs that are popular among ex-offenders. Not only do these laws needlessly require a number of hours of education and training and hundreds of dollars in fees, many licenses contain good character clauses, which essentially prohibit anyone with a criminal record from obtaining the license.

Occupational licensing laws need to be thoroughly reviewed and revamped. At a minimum, they should be relaxed so that people with minor offenses are not automatically banned from becoming licensed. As it stands, Michigan is shutting out a whole class of motivated employees from the state’s labor market.

As the Vocational Village program expands in the coming years, there’s hope that more ex-offenders will find gainful employment after their imprisonment. But the program in its current state is just a small step in the right direction. Lawmakers need to re-examine Michigan’s occupational licenses and make sure they aren’t creating needless barriers to earning an honest living. There are myriad benefits from reducing Michigan’s recidivism rate. Providing ex-offenders with solid employment opportunities is one of the surest ways to do that.