Even After Right-to-Work, Unions Still Big Political Spenders in Michigan

Font size:
While most of Michigan’s largest unions have lost a significant amount of their membership … organized labor is still a major political spender in the state.

Unions and their affiliated political action committees continue to be big players in Michigan elections, spending a lot of money to influence candidate and ballot outcomes. The 2018 elections were no exception.

Here are just a few examples of state and national union spending in Michigan during the last election cycle. This data comes from state and federal campaign spending reports. 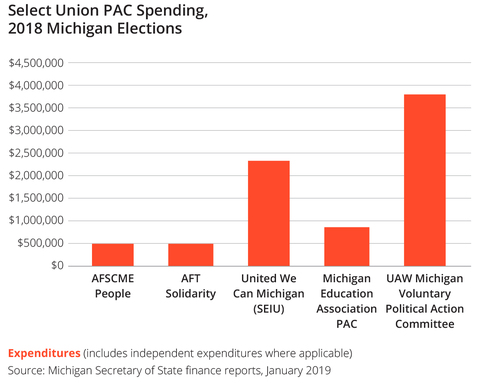 The SEIU’s affiliated super PAC, United We Can, made almost $1.3 million in independent expenditures from Jan. 1, 2017, to Nov. 26, 2018. It also disbursed $1.8 million to a separate super PAC, United We Can Michigan, which spent a total of $2.3 million. United We Can Michigan spent a large sum of money to support Democratic Gov. Gretchen Whitmer and oppose Republican candidate Bill Schuette, spending $960,839.34 for canvassing efforts for the former and $705,838.35 on canvassing to oppose the latter. It also spent $145,300 in advertisements to support Gov. Whitmer.

AFSCME, another of Michigan’s largest unions, spent almost $500,000 in the state, $34,000 of which went directly to Gov. Whitmer’s campaign. Most of the rest, $250,000, went to the Michigan Democratic State Central Committee.

The UAW’s political action committee spent over $3.8 million on the 2018 elections. Included in this amount was $200,000 to the Michigan Democratic Party and $68,000 to Gov. Whitmer’s campaign.

The SEIU Michigan State Council made a $25,000 contribution to Gov. Whitmer’s campaign.

While most of Michigan’s largest unions have lost a significant amount of their membership, and with it, revenue, organized labor is still a major political spender in the state and nationally. Unlike workers in past election cycles, however, today’s workers have a choice in union membership and fees. Workers who don’t like how a union is spending its time or their money can choose to withdraw from it.