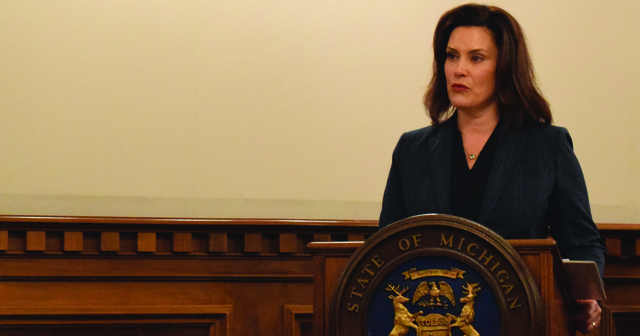 In an effort to slow the spread of the COVID-19 coronavirus, Gov. Gretchen Whitmer has invoked emergency powers granted to her under Michigan law to prohibit individuals from gathering in large groups. She closed public school buildings and issued a broad stay-at-home order, disrupting the daily routines of most Michiganders.

Some might wonder: Can she even do that? It’s a legitimate question to ask. After all, this appears to be an unprecedented use of executive power.

Declaring a state of emergency is not new: Gov. Whitmer’s first ever executive order in late January of last year did just that, in response to dangerously cold temperatures. She declared a state of emergency four more times last year, each dealing with an isolated incident, such as regional flooding.

The Michigan Constitution and two different laws deal with emergency situations. The constitution, however, only mentions emergencies “resulting from disasters occurring in this state caused by enemy attack on the United States.” Indeed, the governor is not, during this emergency, using specific powers granted to her in the constitution. They are provided in statute, instead.

Public Act 302 of 1945, called “Emergency Powers of Governor,” was enacted in response to race riots in Detroit in 1943. It authorizes the governor to declare a state of emergency and exercise certain powers for that period. Specifically, the governor may control traffic, establish a curfew, regulate and prohibit the use and occupancy of buildings and public places, and control the sale and transportation of alcohol, dangerous liquids or explosives. These orders are only effective during the declared state of emergency, and anyone who violates them is guilty of a misdemeanor.

The statute gives the governor broad powers, intending to authorize “sufficiently broad power of action in the exercise of the police power of the state.” But these emergency powers are limited to “times of great public crisis, disaster, rioting, catastrophe, or similar public emergency within the state, or reasonable apprehension of immediate danger of a public emergency of that kind, when public safety is imperiled.”

Public Act 390 of 1976, called the “Emergency Management Act,” is meant for “planning, mitigation, response, and recovery from natural and human-made disaster.” It charges the governor with “coping with dangers to this state or the people of this state presented by a disaster or emergency,” and with issuing orders that have the same effect as law during an emergency. Specifically mentioned is the power to suspend regulatory rules, reorganize state departments, force evacuations and control movements in and around certain areas, and limit the sale of alcohol.

Under PA 390, the governor may declare a “state of disaster” or a “state of emergency.” Each serves a slightly different purpose, but either seems applicable for the coronavirus outbreak, and Gov. Whitmer has declared both. In either case, the statute says these declarations may only last 28 days. After this, the governor may request an extension, but only for a specified period, and the extension must be approved by the Legislature.

As also stated in PA 302 of 1945, this 1976 law holds that violating the orders issued under an emergency is a misdemeanor. While this may appear to be a harsh penalty, it also limits the governor’s emergency powers. The governor may not enforce these orders with more severe penalties, as would be true of felonies. In fact, PA 390 holds that individuals must “willfully” violate an emergency order to be guilty of a misdemeanor, which means the government must prove that the actions were not accidental or unintentional.

The orders issued in the past several weeks have closed schools, prohibited public assemblies and limited the operations of many businesses. Gov. Whitmer has also relaxed government regulations in the health care sector, among other things. In doing so, the governor cited the powers provided under PA 390 to use “executive orders, proclamations, and directives having the force and effect of law” during emergencies. The governor’s actions may be unprecedented, but they are part of her statutorily defined authority.

Thankfully, the state rarely needs to use these emergency powers. Michigan law provides the governor with broad, yet temporary, powers to set policies aimed at mitigating and preventing harm to the public health in an emergency. Hopefully, the actions Gov. Whitmer has taken will do just that.