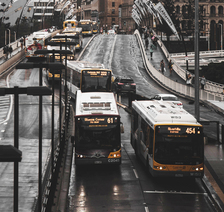 Voters should vote against a regional transit tax.

The Regional Transit Authority of Southeast Michigan has released a proposal to tax metropolitan area residents $5.4 billion over the next 20 years. Called “Connect Southeast Michigan,” the sketchy plan would primarily augment bus service in Macomb, Oakland, Wayne and Washtenaw counties and build and operate a commuter rail line from Ann Arbor to Detroit. With paltry transit ridership in Southeast Michigan and the failure of huge investments elsewhere in the nation to change how people travel in cities or improve their mobility, RTA would be well-advised to go no further. Should the measure be placed on the ballot, voters would be wise to turn it down.

Transit made sense when most jobs were clustered downtown and many people did not have cars. But that was long ago and changed quickly after World War II.

More than 60 percent of the money would go to operations — more bus service. But the chances of delivering the promised service are small. Transit agencies have routinely over-promised, as rising operational costs have often consumed the new tax money that was to have been used for expanded service. Indeed, since the federal gas tax was tapped for transit service in the early 1980s, transit expenditures have risen two times faster than passenger usage, after adjusting for inflation. It is hard to find a segment of the economy in which costs have risen as much.

Worse, few people will find the service convenient enough to use. Transit’s best market is travel to and from work. Less than 2 percent of workers commuted to work by transit in the four counties in 2016. This is about 60 percent below the rate for Los Angeles, where the automobile is king. Even with 2 million new residents in Los Angeles County and $15 billion in new funding for rail, transit ridership there has fallen by 20 percent since 1985, when there were only buses. In Southeast Michigan, meanwhile, transit has become so marginal that more than twice as many people work at home.

Transit made sense when most jobs were clustered downtown and many people did not have cars. But that was long ago and changed quickly after World War II. Today, nearly 60 percent of transit commuters work in just six urban core cities (New York, Chicago, Philadelphia, San Francisco, Boston and Washington). Despite having the six largest downtowns in the nation, these places have barely one-tenth of the national employment (7 percent). There is no going back. Detroit will never be New York or Boston.

The only place in metropolitan areas with a sufficient concentration of destinations is downtown. “Edge cities” like Southfield and Troy are large suburban business centers that often rival downtowns in size; they simply cannot be served effectively by transit.

Transit is often promoted as providing mobility for low-income citizens. Yet, among those in poverty in metropolitan Detroit, 15 times as many drive or carpool to work as ride transit. There’s a simple reason for this. You cannot get from here to there on transit.

Meanwhile, across the Detroit metropolitan area and in others from Los Angeles to Boston, automobile commuters reach their jobs in a half hour or less. Transit takes twice as long on average, if there is even service.

At the same time, new rail systems, such as the proposed Ann Arbor to Detroit commuter rail line, have been so notorious for cost overruns that they are the subject of a burgeoning international academic literature. Sooner or later, the rising costs of a rail line will likely preclude efforts to expand bus service.

Even if all the promised service is provided, it will make little difference to residents and the RTA will likely be back before too long looking for more money. The “Big Disconnect” would be a better name for this hopeless proposal.