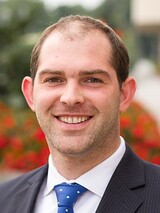 Joe Milligan is a director of strategic partnerships at the Mackinac Center for Public Policy, as well as a member of the board of policy advisors at the Heartland Institute and a Senior Policy Advisor at the National Puerto Rican Chamber of Commerce. Before joining the Mackinac Center’s advancement team, Milligan cofounded and directed a public policy research and education institute in San Juan, Puerto Rico where he played a key role in garnering support for the organization’s inception and bringing together a community of liberty lovers in that area.

Milligan grew up in Rochester Hills where he has lived for most of his life and attended Rochester College and Oakland University. He has been involved in local political campaigns and spent a summer as an intern for a Michigan state representative in Lansing.

As a writer, Milligan’s columns have appeared in The Hill, The Wall Street Journal, Caribbean Business, Think Freely Media and local San Juan based outlets. When he isn’t working as an ambassador for the Mackinac Center you’ll find him fly fishing on the Au Sable River, or rooting for the Detroit Tigers at Comerica Park.

Supporting the Freedom Movement is Nothing Short of Heroic