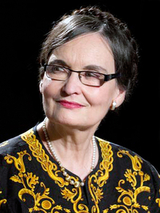 Annette Kirk is president of The Russell Kirk Center for Cultural Renewal. She is also president of the Educational Reviewer, Inc. (New York, New York), editor of The University Bookman, Director of Programs for the Wilbur Foundation (Santa Barbara, California), and a board member of The Philadelphia Society. Kirk was a member of the National Commission on Excellence in Education, which in 1983 issued the educational-reform report, A Nation at Risk. From 1984 to 1987 she was a member of the committee on education of the United States Catholic Conference. She was married to Russell Kirk for thirty years and has four daughters.