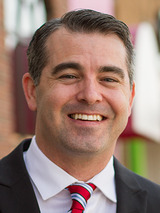 Justin Davis was multimedia producer at the Mackinac Center for Public Policy.

Prior to joining the Mackinac Center, Justin spent over a decade in the entertainment industry. His experience includes stand-up comedy, public speaking and reality television — including 5 seasons on The Amazing Race. He is a graduate of The Second City's Conservatory Program. He then decided to go back to college, where he read "When We Are Free,” which helped ignite his passion for liberty, free-market principles and classical liberalism.

Justin lives in mid-Michigan with his lovely wife and three spirited children.