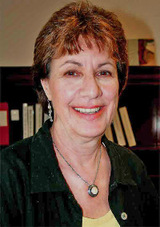 Barbara Levine was associate director of the Citizens Alliance for Prisons and Public Spending.

Levine was the founder and executive director of CAPPS from 2000-2013 and is the architect of its policy recommendations.  She opted to serve as associate director to focus entirely on research and policy development.

Levine received her Bachelor’s and Juris Doctor degrees from the University of Michigan.  She has been a member of the Michigan Bar since 1974. She began her career as a staff attorney at the State Appellate Defender Office, representing indigent felony defendants on appeal of their convictions.  From 1979-1983, she taught law school, first at Wayne State University, then at the University of Toledo.  She served as a Commissioner for the Michigan Supreme Court until 1985, when she became the first administrator of the Michigan Appellate Assigned Counsel System (MAACS).  In that capacity, she trained lawyers appointed to represent indigent defendants on appeal, oversaw the appointment process, enforced minimum performance standards, and worked to obtain improved funding for indigent defense services. Ms. Levine left MAACS in 1999 to focus exclusively on issues affecting prisoners and the constant expansion of the prison system.

Ms. Levine was a founding member of the Prisons and Corrections Section of the State Bar of Michigan and served as its first chairperson.  She has been a member of the State Bar Standing Committee on Character and Fitness for more than a decade. She also served for many years on the board of Prison Legal Services of Michigan and was formerly the chair.

In addition to her organizational work, Ms. Levine has litigated prison conditions and parole board decisions.  She was co-counsel on Overton v Bazzetta, a case regarding prisoners’ visitation rights decided by the United States Supreme Court in 2003.  She was also counsel on Morales v Parole Board, in which the issue was whether Michigan prisoners have any right to appeal parole board decisions.