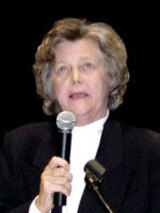 The late Martha R. Seger, Ph.D. served on the Mackinac Center's Board of Scholars and was a distinguished visiting Professor of Finance, Central Michigan University. Dr. Seger was an Economic consultant and Principal of M.R. Seger & Associates, a financial and economic consulting firm from 1994 to 2001. She served as John M. Olin Distinguished Fellow, University of Arizona, 1991 to 1993; Member, Board of Governors of the Federal Reserve System from 1984 to 1991. Dr. Seger was a Director of Commonwealth General Corporation (known as Providian Corporation). She served as a Director of the Bramwell Funds. Her other directorships included: Amerisure Companies; Xerox Corp.; Kroger Co.; Johnson Controls Inc. and Amoco Co. Dr. Seger served as Director of Massey Energy Co. from 1991 to May 22, 2007 and Fluor Corp. from 1991 to January 7, 2005. She also served as a Director of BP plc and Tucson Electric Power Co.