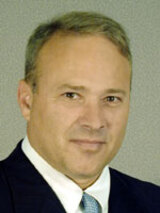 John E. Coonradt is the former vice president for advancement for the Mackinac Center for Public Policy. Coonradt was responsible for all aspects of the Center’s advancement effort.

Coonradt came to the Mackinac Center from Hillsdale College, where he was director of corporate institutional advancement, and before that, a dean of the college. Coonradt is a former Marine officer who served as an infantry commander and worked several public affairs assignments before resigning his commission in 1993. He has traveled to over 30 countries, including the former Soviet Union and East Germany, Somalia, Kuwait, Saudi Arabia and numerous other European, Middle Eastern and Asian nations. He also has worked with national and international media on various military topics and issues.

He has had articles published in the Hillsdale’s monthly journal of opinion, Imprimis (readership 1 million), and the Marine Corps Gazette. Coonradt holds a B.A. in journalism from the University of Iowa and lives in Midland with his wife, Nicole, and their three sons.

A “Little Rebellion,” a Great Man

The Visionary and the Reactionary

The Legacy Society: Nurturing the Tree of Liberty

Great Things in Mind for Michigan