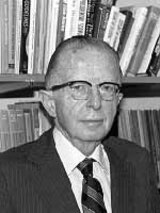 Dr. McCracken was a native of Iowa. He held an A.B. degree from William Penn College, Oskaloosa, Iowa, and M.A. and Ph.D. degrees in economics from Harvard University. Additionally, he held honorary degrees from several colleges and universities, including William Penn College, Albion, Berea, Central Michigan University, and Northern Michigan University. After graduate study at Harvard, he worked as an economist in the U.S. Department of Commerce, Washington, D.C., and then as a financial economist and director of research at the Federal Reserve Bank of Minneapolis.