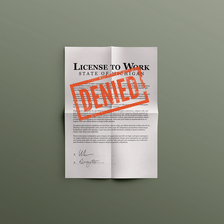 An occupational license may stand between an ex-convict and a productive, crime-free life.

Should someone with a criminal record be prevented from working? While most people would say no to this idea, that is often the result of Michigan’s occupational licensing laws. By raising the barriers to work legally and by prohibiting those with a criminal record from getting a license, these laws prevent people from becoming productive members of society.

A person who has been convicted of a felony, especially someone just coming out of prison, faces a number of barriers to getting a job. Many employers won’t even consider someone with a criminal record. Such individuals may not have much formal education, making them look even worse on paper. To make matters worse, licensing laws often prevent them from working for themselves.

It’s important to remove regulations to benefit consumers and the overall economy. But it is even more important to do so for Michigan citizens who want to join and move up through the working class.

State licensing laws typically include a provision requiring that someone seeking a license to work demonstrate “good moral character.” This essentially allows state regulators and occupational boards to deny a license to someone who has a record. Criminal felony convictions, regardless of their severity, often will prevent someone from getting a license.

Licensing decisions are made on a case-by-case basis, and they can be appealed. But even if a crime was years ago and has little connection to the occupation in question, an ex-convict is often out of luck. Even a small-time conviction, like a minor drug crime or act of vandalism from years ago, can set a person back. Should it prevent a person from cutting hair or painting a barn? Too many times, it does.

Michigan requires licenses for more than 200 occupations, and more than 20 percent of workers need government permission to hold a job. The list of occupations the state has chosen to license seems arbitrary: People need to take mandated contracting classes and pay extra fees to install wood floors (but not carpet or vinyl). The same rule applies to people who would pave concrete (but not asphalt), paint a wall (but not put up drywall), put up siding (but not a fence), take down a house (but not move it) and more.

A person who can’t find a job or join a profession is left with few legal options to make ends meet. Is it any wonder, then, that recidivism rates are as high as they are? No matter your view of the criminal justice system, it should be clear that this isn’t a good situation for people trying to get their lives back together. It’s also not good for the people who would benefit from their productivity.

In 2012, Gov. Snyder commissioned a report to review the state’s occupational licensing laws, and it called for many of them to be loosened and others to be repealed outright. Over the past few years, state lawmakers have done some good bipartisan work by repealing six of these unnecessary laws.

But much more needs to be done. While some occupations were delicensed — dietitians, clerical assistants, auctioneers — Michigan still requires licenses for many occupations that most other states do not. Legislators need a process to evaluate every occupation that requires a license — and get rid of the ones that cannot be shown to have a positive impact on public health or safety.

It’s important to remove regulations to benefit consumers and the overall economy. But it is even more important to do so for Michigan citizens who want to join and move up through the working class. It benefits no one to prevent people who have received their punishment from ever legally working again.