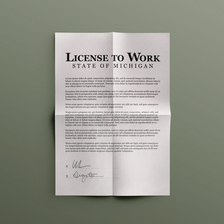 To work in about 20 percent of the jobs in Michigan, you need a government-issued license.

Michigan has a problem shared by most other states: We license too many occupations, making it harder for people to land jobs and start businesses than it should be. This disproportionately harms low-income residents, and the evidence shows that these laws provide no increased consumer protection.

Licensing laws are anti-competitive, increase prices for consumers and cause higher unemployment and lost jobs.

When it comes to labor issues, the minimum wage and right-to-work often dominate the headlines. But occupational licensure — where the government mandates training, fees and testing before someone can get a job or provide a service — affects more workers than those two laws combined.

In the academic literature, there is a spirited debate about the effects of the minimum wage and unionization on jobs, wages and the economy. But in the area of licensing, there is a wide consensus among economists — these government rules and regulations harm the economy, increase income inequality and provide little or no benefit to consumers.

In July 2015, President Barack Obama’s White House Council of Economic Advisers released a report that found “evidence that licensing requirements raise the price of goods and services, restrict employment opportunities, and make it more difficult for workers to take their skills across state lines.” It recommended that states adopt best practices to eliminate these barriers to work.

Free-market organizations like the Mackinac Center, the Institute for Justice, the Mercatus Center and The Heritage Foundation have done work with similar findings. So has the Kauffman Foundation and the center-left Brookings Institution.

University of Minnesota professor Morris Kleiner, probably the leading expert on occupational licensure laws, noted recently, “Economic studies have demonstrated far more cases where occupational licensing has reduced employment and increased prices and wages of licensed workers than where it has improved the quality and safety of services.”

So what can be done? Michigan is on the right path: The state has eliminated the licenses needed for nine occupations over the past few years. Gov. Rick Snyder has said he will not sign legislation requiring more licensing unless it is shown to directly protect citizens. And Michigan’s licensing agency is mostly on board with these and other reforms.

But the licensing mandates we do have are too stringent and are often arbitrary. For instance, do security guards need three years of training? About half the states require 10 days or less. Besides rejecting new licensing, which is always pushed by those already in the industry to lock out their competition, legislators need to review the laws currently on the books. The state could set up an automatic review process like in Texas, where each license requirement must be voted on every five years to be continued.

Even if a license cannot be eliminated, the state should look to other, less-stringent, regulatory tools like inspections, anti-fraud legislation, insurance requirements, registration or optional state-approved certification. In today’s information age, where reviews and opinions of nearly every business are available instantly in the palm of our hands, do we really need state licenses to tell us if a business is any good? When’s the last time you considered whether a business had the appropriate state license when deciding if you wanted to buy its service?

Licensing laws are anti-competitive, increase prices for consumers and cause higher unemployment and lost jobs. For the benefit of consumers and people who want to work, Michigan should reform and eliminate its hundreds of mandatory licenses.