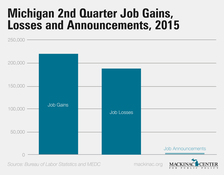 People expect the impossible from state politicians on economic matters: “Create jobs.” The demand on politicians to create jobs leads them to throw taxpayer money at business projects, though the effort is counterproductive.

To show that they’ve listened to the call to create more jobs, politicians need examples of businesses that have opened or hired more people. But business owners and managers are not required to report every change in employment to their local politicians, let alone tell them whether the politician’s favored policies have anything to do with it.

Instead of distributing money from other taxpayers or bending the rules for select businesses, the better strategy is to change the rules to encourage more expansions and fewer layoffs.

For the people who hold office, giving favors to select businesses is the logical political response to the call for more jobs. They can say, “Thanks to this or that program or law, here are how many jobs exist in our community.” So, for example, the press releases from the Michigan Economic Development Corporation — the administrator of the state’s benefits to selected companies — can announce that in the second quarter of 2015, projects receiving state assistance proposed to “create or retain” 4,240 jobs. The announcement heralding these jobs is valuable publicity. But if a project receiving selective help fizzles out without the jobs showing up, that rarely makes the news.

More importantly, an economy doesn’t grow through press releases, and publicity-driven efforts to help it grow impede what actually works. For as large as government may seem, its ability to move the economy is actually rather small. It is the unheralded business gains and losses that drive the economy. Across the state, businesses are constantly adding and shedding jobs. While the MEDC was announcing 4,420 jobs, Michigan gained 222,000 jobs and lost 187,000, according to the latest data.

So even if the happy announcements were in fact fully materialized — which is not likely to happen — the jobs would account for 1.9 percent of jobs recently created. (And the announcements are not likely to address any of the reasons for the 187,000 jobs lost.)

Moreover, there is a cost to those favors that also has an economic impact. Those jobs created through the assistance of the state cost taxpayer dollars that could have been used for other purposes or returned to taxpayers.

Instead of distributing money from other taxpayers or bending the rules for select businesses, the better strategy is to change the rules to encourage more expansions and fewer layoffs. For instance, taxing the incomes of Michigan residents — including business owners — less would encourage both more expansions and discourage job loss.

The state has tried both approving select favors and improving the overall business climate. But only broad-based improvements will improve the state’s economic prospects.

James M. Hohman is the assistant director of fiscal policy at the Mackinac Center for Public Policy, a research and educational institute headquartered in Midland, Michigan. Permission to reprint in whole or in part is hereby granted, provided that the author and the Mackinac Center are properly cited.