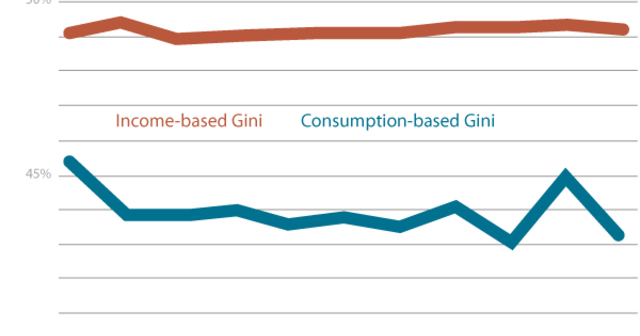 Inequality in Michigan: Not As Bad As You Think

Economic inequality continues to be a persistent theme in both national and state politics and is a hot topic of academic studies. As the 2016 presidential campaign moves into the primary season, crusaders against economic inequality will likely grow even more vocal, with presidential candidates making it a key part of their platforms. While a lot of this discussion will happen at the national level, Michigan policymakers will undoubtedly use this popular issue to push their preferred policy recommendations, such as boosting the minimum wage, hiking income taxes, increasing aid to public universities and many others.

When economic inequality is measured by differences in average consumption, the gap between the “haves” and “have-nots” in Michigan isn’t quite as shocking or troublesome as the income-based statistics suggest.

When politicians talk about inequality, they usually only focus on income inequality — the differences between the average wages, salaries and retirement incomes of one tax bracket versus another. But there’s more to measuring people’s economic well-being than just reported taxable income. In fact, a better measure is consumption — the goods and services that people actually spend money on and use to improve their lives and contribute to their happiness. When economic inequality is measured by differences in average consumption, the gap between the “haves” and “have-nots” in Michigan isn’t quite as shocking or troublesome as the income-based statistics suggest.

The most popular way to quantify economic inequality is with the Gini index, which scores the level of inequality between 0 percent (perfect equality) and 100 percent (complete inequality). The following analysis of consumption inequality in Michigan relies on data obtained from the Consumer Expenditure Survey of the Bureau of Labor Statistics. The survey asks households about their spending on clothing, food, alcoholic beverages, housing, education and more and is used to determine poverty thresholds, to estimate health care expenditures and to make cost-of-living adjustments for military families. Data from the U.S. Census Bureau and recent academic studies can be used to measure income inequality in Michigan. 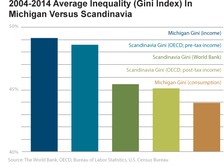 Based on these data, consumption inequality in Michigan has consistently been lower than income inequality. From 2004 through 2014, the average Gini index for household consumption was 20 percent from 2004 to 2014, compared to 46 percent based on household income. Contrary to the popular myth of rampantly increasing inequality during the Great Recession, in Michigan, both consumption and income inequality pretty much remained the same from 2007 through 2014 — mirroring trends for the United States as a whole, as reported recently in The New York Times.

One useful comparison for putting Michigan’s level of consumption inequality into perspective is the average Gini scores for the Scandinavian countries of Denmark, Norway and Sweden. Their income inequality levels are the lowest among the developed countries, and they are often heralded for their large welfare states that supposedly generate the fairest economic outcomes.

Based on this comparison, Michigan’s household consumption-based Gini index ranks below the average household income Gini index for these three countries. This holds true even considering both pretax and post-tax income measures. In fact, Michigan’s income-based Gini index is only slightly larger than the average pretax Gini index for the three Scandinavian nations. All told, the economic inequality problem in Michigan does not appear to be as bad of a problem as it has been made out to be.

The fact that consumption inequality is 26 percentage points less than income inequality in Michigan suggests that differences in income don’t necessarily cause differences in households’ overall well-being. High-income households in Michigan are not spending significantly more than low-income ones. This partially explains why the majority of Americans living below the poverty level have TVs, air conditioning, cars and more living space than the average person in London or Paris, as noted by economist Thomas Sowell. These results should generate some skepticism of claims from politicians or the media about the harshness of economic inequality in the United States.

It’s also important to remember that inequality in outcomes doesn’t imply inequality in opportunity. Differences in the size of peoples’ paychecks are not always a sign of systematic oppression, discrimination or market failures. Instead, they may reflect natural differences in individual abilities and productivity, as well as the effects of personal choices concerning education, work and lifestyle. As Larry Reed, president emeritus of the Mackinac Center, once said: “Free people are not equal, and equal people are not free.”

John O’Trakoun (otrakoun@bc.edu) is a senior economist at Ford Motor Company, and was previously a senior economist for the U.S. Government Accountability Office. He has a doctorate in economics from Boston College. This commentary is provided by the Mackinac Center for Public Policy, a research and educational institute headquartered in Midland, Michigan. Permission to reprint in whole or in part is hereby granted, provided that the author and the Mackinac Center are properly cited.