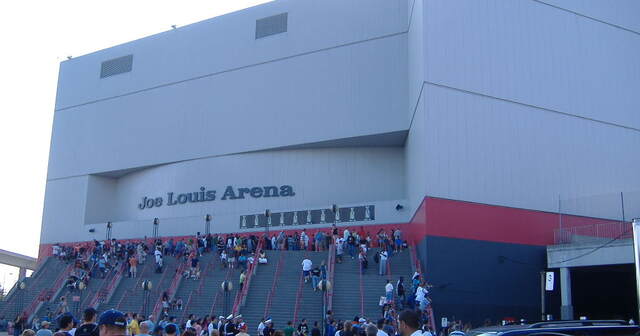 Taxpayers will pay $250 million to replace this building to benefit a family with a net worth of $5.5 billion.
Publications / Viewpoints

The Red Wings’ new arena is in the news again: It will now cost $627 million. Luckily, taxpayers won’t be on the hook for the extra $177 million above the initial $450 million estimate. Unfortunately, they’re still on the hook for $250 million of the costs.

The justification for taxpayer-financed stadiums usually runs along the lines that they will boost the local economy. And Detroit’s economy certainly needs boosting. But economists who study this issue consistently find no long-lasting economic benefit from publicly financed sports stadiums.

If the taxpayers pay for the stadium, then the taxpayers should get the copyright for broadcasts of the events the arena hosts. That is, prohibit any copyright protection for events that take place in publicly funded stadiums.

Economist Dennis Coates has studied the economic impact of stadiums on cities for nearly two decades. In a recent study published by the Mercatus Center at George Mason University, he updated some of his earlier work to include more cities over a longer time frame. He found that the economic impact of new stadium construction was weak or nonexistent and that “franchises, stadiums, and arenas may be harmful rather than beneficial to the local community.”

Nevertheless, many sports stadium owners still manage to secure hundreds of millions of dollars in taxpayer subsidies, successfully arguing that if they don’t get government funding, they’ll take their beloved sports team and leave for another town that will put up the money.

This is what happened in Milwaukee. Wesley Edens and Marc Lasry, who combined are worth more than $3 billion, got the state of Wisconsin to fund $250 million for a new stadium (plus at least $174 million in interest payments to boot). If funding was not secured, the team said, it would move to Las Vegas or Seattle.

Arrangements such as the ones in Detroit and Milwaukee are especially harmful when the local government offering up taxpayers’ money is running a deficit or cutting funding for other, important programs. Wisconsin sliced $250 million from its education budget. Detroit declared bankruptcy, is dealing with pension-funding shortages, and has underfunded its fire stations. Yet Michigan taxpayers are transferring a quarter-billion dollars to the Ilitch family, with a worth of $5.5 billion, to replace an already existing and functional arena.

Stating that subsidizing the rich is bad policy has done nothing to stop it from happening again and again. What is needed is a policy change, and here’s one proposal worth considering: If the taxpayers pay for the stadium, then the taxpayers should get the copyright for broadcasts of the events the arena hosts. That is, prohibit any copyright protection for events that take place in publicly funded stadiums. This means that anyone would be able to stream or upload video of the event to the Internet without fear of violating copyright law.

Television broadcasts of sports, which are covered by U.S. copyright laws, generate billions in revenue. But if the public is going to pay for the stadium, shouldn’t the public get a right to see what’s broadcast from that stadium? Giving the public the copyright would also make it difficult for teams and sports associations to use television blackouts to effectively restrict the public’s viewing access.

Prohibiting copyright protection on events in publicly funded arenas will alter the incentive structure for stadium funding. Instead of teams holding cities hostage for massive handouts, owners will build their own stadiums with their own funds to protect television and radio revenues. Teams could not play one city off another because it would be applicable across all American cities.

Owners might cry poverty, but that is laughable. While not every single owner is a billionaire, many are. On the Forbes list of the 400 richest people in America, 39 are some sort of owner or partner of a major sports team, with a combined worth of $182 billion. And that is just the net worth of a fraction of all owners.

Such a policy should find support from across the political spectrum. Those on the left should support a law that eliminates corporate welfare for the 1 percent. Those on the right should support a law that limits taxpayers’ liability to fund projects that don’t yield economic benefits to the local community. No matter how you look at the issue, it’s time to bench publicly financed sports stadiums.

R. Warren Anderson is an assistant professor of economics at the University of Michigan-Dearborn. This commentary is provided by the Mackinac Center for Public Policy, a research and educational institute headquartered in Midland, Michigan. Permission to reprint in whole or in part is hereby granted, provided that the author and the Mackinac Center are properly cited.