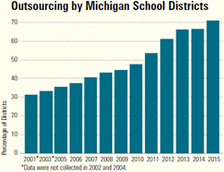 Seven out of 10 Michigan school districts use contracting for at least one of the three major noninstructional services.

The rate at which Michigan schools contract out for noninstructional services increased again last school year, this time to 70.8 percent of all conventional public school districts in the state. This is up from 66.6 percent in 2014. The use of competitive contracting for noninstructional services overall has increased in each of the 12 Michigan-specific surveys conducted by the Mackinac Center since its first survey in 2001.

This year, the Mackinac Center expanded its survey research to include the states of Texas, Ohio, Pennsylvania, and Georgia, the better to watch for national trends in contracting. Done correctly, competitive bidding of noncore services can yield big savings, alleviate management headaches and free up precious time and money for the classroom.

In past surveys, the Mackinac Center has found average per pupil savings ranging from $34 (food) to $110 (transportation) to as high as $191 (custodial). That is a lot of money that can be repurposed to the classroom.

Growth in Michigan districts’ use of competitive contracting for the big three noninstructional services has been robust. In 2001, our first survey found that 31 percent of districts were contracting out food, custodial or transportation services. This year, more than 70 percent do — a 128.5 percent increase in just 14 years.

Of Michigan’s 542 conventional school districts, 144 or 26.6 percent contract out for transportation services. That is up from 3.9 percent in 2003. Custodial service contracting is also up dramatically since our first survey. Our latest survey indicates that 283 districts — 52.2 percent of the total — contract out for custodial services. This is up from just 6.6 percent in 2003. Food service contracting rang in at 42.8 percent of all districts.

Michigan isn’t the only state that embraces this widely accepted practice, though some states seem to embrace contracting out certain services rather than others. To get a handle on what was going on elsewhere in the country, the Mackinac Center surveyed four additional states representing more than 2,300 conventional public school districts.

Pennsylvania is also an interesting case study. It leads all five states in overall contracting at 75.2 percent, due in large part to its extensive use of contracting for transportation. A stunning 66.4 percent of conventional public school districts contract out for transportation services — frequently with more than one vendor. Custodial service contracts can be found in 9.0 percent of districts and food service contracts in 44.6 percent.

Although some of these trends are certainly encouraging, our findings suggest a lot of money is being left on the table.  In past surveys, the Mackinac Center has found average per pupil savings ranging from $34 (food) to $110 (transportation) to as high as $191 (custodial). That is a lot of money that can be repurposed to the classroom.

As additional districts take notice, we expect to see cost-saving opportunities arise and will ensure that school support data is readily available to administrators along the way.

Michael LaFaive is the director of the Morey Fiscal Policy Initiative and Philip Schlosser is a research assistant at the Mackinac Center for Public Policy, a research and educational institute headquartered in Midland, Michigan. Permission to reprint in whole or in part is hereby granted, provided that the author and the Mackinac Center are properly cited.