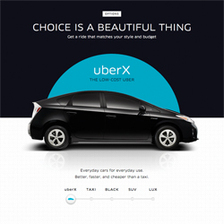 Uber, along with similar services, is shaking up the car-for-hire industry.

Government regulations are meant to serve the public interest primarily by protecting consumers and fostering fair competition. But sometimes regulatory power can be used to harm the public and smother the benefits of a competitive marketplace. Economists call this “regulatory capture,” and it is at the heart of the debate about new ride-sharing companies like Uber.

Regulatory capture happens when businesses convince politicians to create regulations that artificially benefit incumbent firms at the expense of entrepreneurs and consumers. These regulations often artificially limit the supply or boost the demand of a good or service. Incumbent firms can then charge higher prices and rake in larger profits.

The ultimate goal for policymakers should be to protect the public interest with the least intrusive regulations possible, so as to promote more competition and innovation in the car-for-hire industry, which will drive down prices for consumers.

Taxi companies benefit from such regulatory capture, and they are fighting to maintain this privilege in light of new competition from ride-sharing services like Uber. Over the years, taxi firms have successfully lobbied local politicians to institute rules that limit entry into the market, insulating them from competition and allowing them to charge higher prices. This issue is prominently on display in places like Paris and New York City,
but it is also playing out right here in Michigan.

Uber, which lets people summon rides from independent drivers through a smartphone app, is currently operating in a half dozen markets in Michigan, ranging in size from Detroit to Kalamazoo. The problem for Uber and its users is that the company has to get the approval of local government officials before it can expand into any new areas. Uber risks violating local ordinances because car-for-hire regulations are designed to help existing taxi companies and were created before Uber or smartphones even existed. This regulatory environment, which has yet to catch up with emerging technology, slows the growth of ride-sharing services and increases Uber’s costs of competing.

Rep. Tim Kelly of Saginaw Township, however, has introduced a seemingly reasonable solution. His legislation would create new statewide regulations for ride-sharing companies that are fairly robust. They require ride-sharing companies to pay an annual permit of $5,000, subject themselves to state audits, maintain a certain level of insurance and only hire drivers with clean driving and criminal records and use insured cars that are inspected annually.

If this legislation were to become law (it already passed the Michigan House), Uber would be able to immediately expand around the state, offering new job opportunities for thousands and cheaper, more convenient rides for thousands more.

But there’s a competing package of bills in the Michigan Senate that would double down on the local regulations that taxi companies have captured. Sens. Rick Jones of Grand Ledge and Dale Zorn of Ida want to create similar regulations to the ones introduced by Kelly, but also force ride-sharing companies to comply with the 25-year-old Limousine Transportation Act. Their bills would carve out specific regulations for Detroit and allow local officials to pile on their own set of rules. Uber representatives have testified that these regulations would almost entirely choke out their ability to expand in Michigan.

When assessing the merits of these options, it is important to remember that there are no perfect solutions to public policy problems, only tradeoffs. These regulations cannot make taking a taxi or Uber risk-free; all they can do is attempt to lower that risk. It is unclear how the Senate bills would make consumers any safer than they would be under the House legislation. Rather, it appears the primary objective of those bills is to protect the existing taxi companies from Uber’s disruptive innovation.

The ultimate goal for policymakers should be to protect the public interest with the least intrusive regulations possible, so as to promote more competition and innovation in the car-for-hire industry, which will drive down prices for consumers. This issue is not going away, and Michigan policymakers need to decide if they are going to continue to allow taxi companies to benefit from regulatory capture or open up the car-for-hire market to new entrants and let consumers decide who should get their business.

Michael Van Beek is the director of research at the Mackinac Center for Public Policy, a research and educational institute headquartered in Midland, Michigan. Permission to reprint in whole or in part is hereby granted, provided that the author and the Mackinac Center are properly cited.