Not As Good As You Think: How Michigan’s Wealthier Schools Escape Scrutiny 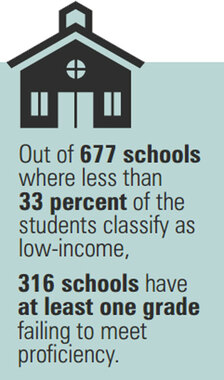 Two of every five schools with higher-income students have at least one grade level achieving below the proficiency level.

The plight of failing schools is often seen as a struggle limited to Michigan’s urban centers: Indeed, many of Michigan’s lowest-ranked schools are located in Detroit, Flint or Pontiac. But Michigan parents might be surprised to learn many schools in wealthier, suburban districts are failing to provide an acceptable education to their families as well. Though these schools may appear to be doing all right, a new study from the Pacific Research Institute shows that hundreds of Michigan suburban schools are shortchanging their students.

To provide a better measure of school performance, the state should measure schools on the basis of student academic growth, or take student socioeconomic status into account.

For a variety of reasons, poverty plays a role in student academic performance. It is a long-established fact that school-level test scores are correlated with rates of student poverty. Generally, schools that enroll a high percentage of students from poverty backgrounds post lower academic results, while schools that enroll more students from higher-income backgrounds tend to post higher academic results. There are many possible factors driving this relationship, including the basic truth that students in suburban schools do not face the same struggles of safety and family life that their high-poverty counterparts deal with on a regular basis.

Given poverty’s impact on student outcomes, examining a school’s academic performance within the context of student socioeconomic background provides a more complete view of school performance.

The Pacific Research Institute’s study, “Not As Good As You Think: Why Middle-Class Parents in Michigan Should be Concerned About Their Local Public Schools,” takes a closer look at Michigan’s middle-class and higher-income schools, while taking student socioeconomic status into account. PRI shows that hundreds of suburban schools that enroll students from middle-class families are actually failing to produce acceptable academic results.

The higher-income schools PRI examined are those where a third or fewer of the enrolled students were eligible for free- or reduced-price lunch — meaning that a large majority of students do not come from poverty. Close to half of Michigan students are eligible for the National School Lunch Program, which limits eligibility by income level. Students who are eligible for the program come from families close to the federal poverty line. For example, a family of four would have to earn less than $45,000 per year to be eligible.

A higher-income school is identified as “not as good as you think” in PRI’s study if it has more than half of its students failing a state assessment, or if the school is performing worse than expected, given its student population.

Consider Armada High School, northeast of Detroit in Macomb County: The school enrolls one of the wealthier student family populations in the state, with just 14 percent of its students eligible for subsidized lunches. And yet, just 15 percent of its juniors scored as “college ready” on the ACT in the 2013-14 school year. That’s lower than the statewide average.

More deplorable is the fact that the percentage of Armada 11th-graders scoring “proficient” or better on the state mathematics test has been lower than the statewide average for the last five years in a row. Indeed, Armada High School received an F on the Mackinac Center’s high school report card, which adjusts for student socioeconomic background, and includes four years of student academic performance.

And yet, Armada was able to do reasonably well on the state of Michigan’s annual “Top-to-Bottom” ranking of schools, which is strongly correlated with student poverty.  Essentially, Armada is able to “get by” with its student population. If the state took student socioeconomic background into account when grading schools, Armada would likely receive a much lower score.

The PRI study serves to shine an important light on more than 200 schools in suburban districts that are able to escape scrutiny, due to their higher-income student populations. The fact is, school quality is an issue that faces all Michiganders – not just those in the state’s urban centers. To provide a better measure of school performance, the state should measure schools on the basis of student academic growth, or take student socioeconomic status into account. Otherwise, schools located in high-poverty neighborhoods will be disproportionately penalized, and schools in higher-income neighborhoods will continue to escape scrutiny.

Audrey Spalding is director of education policy for the Mackinac Center for Public Policy, a research and educational institute headquartered in Midland, Mich. Permission to reprint in whole or in part is hereby granted, provided that the author and the Mackinac Center are properly cited.