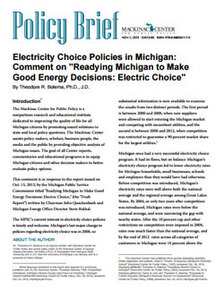 Data assembled by the Mackinac Center show that electricity choice has widespread benefits. Read the full brief at Mackinac.org/19316

Michigan’s large electricity utilities — Consumers Energy and DTE — have launched a new campaign asserting that Michigan will soon be facing electricity shortages. Part of their proposed solution is to eliminate the small part of Michigan’s electricity market that allows customers to purchase electricity from alternative suppliers. In other words, the big utilities want to fight projected shortages by preventing anyone other than themselves from supplying electricity. But Michigan’s experience with choice shows that consumers benefit when there are more suppliers in the energy market.

Michigan competes with nearby states to attract businesses that will help grow the economy, and the chokehold on electricity choice makes economic growth more difficult.

The assertions are similar to the warnings that Michigan utilities made a decade ago about shortages, which failed to materialize. The state may indeed need new capacity going forward.  But that is an argument for letting more energy suppliers enter the market, not restricting the market so that DTE and Consumers become the sole suppliers in this state.

Nor is it likely that letting customers choose their electricity supplier will be a threat to reliability, or trigger increased blackouts. Electricity-choice programs operate entirely at the generation and sales level, while outages occur in the transmission and distribution of electricity. Electricity transmission and distribution has long been a regulated monopoly in Michigan, and DTE and Consumers still have monopoly control over these operations. If the state has reliability issues and blackouts, it is not a result of customers choosing alternative electricity suppliers.

Michigan’s experience with allowing alternative suppliers to enter the market and compete with the big utilities provides strong evidence that electricity choice benefits customers. Michigan first authorized a choice program with Public Act 141 of 2000. Over the next eight years, electricity rates rose nationally, but Michiganders faced smaller increases than residents of the surrounding states or the nation as a whole. By 2008, the last year in which Michigan had a full choice program, Michigan rates had dropped below the national average, and were competitive with rates in states nearby.

Michigan rates quickly became less competitive after the cap was imposed. By 2009, Michigan electricity rates had soared back above the national average. Michigan’s electricity customers now pay more than customers in any of the surrounding states, and 6 percent more than the national average. Michigan residents, employers, and the state economy as a whole are paying a high price for protecting the monopoly status
of its largest utilities.

Michigan’s electricity rates are not only important for their impact on electricity bills for households. They’re also important because businesses factor in these electricity costs when determining where to locate or expand. In other words, Michigan competes with nearby states to attract businesses that will help grow the economy, and the chokehold on electricity choice makes economic growth more difficult.

Michigan is not the only state in the Midwest to have implemented a choice program, but it is the only state to have largely abandoned choice by introducing a cap. Illinois and Ohio have also introduced choice programs that have been very successful in holding down rates. While Michigan’s electricity rates increased by 24 percent from 2008 to 2014, Ohio’s only grew by 15 percent and Illinois’s fell by 4 percent. Indiana and Wisconsin have not adopted electricity choice programs, and their rates increased the most from 2000 to 2014 (even though they were still competitive in the region).

The results of Michigan’s on-again off-again policies toward customer choice have been entirely predictable. Competition has brought innovation and lower prices, while monopolists insulated from competition have raised prices — and now seek to take away the limited choice that remains. The easiest way for policymakers to help reduce the price of electricity for everyone in Michigan is to reopen electricity to a competitive market.

Theodore Bolema is the director of policy research editing with the Mercatus Center at George Mason University and an adjunct scholar with the Mackinac Center for Public Policy, a research and educational institute headquartered in Midland, Mich. Permission to reprint in whole or in part is hereby granted, provided that the author and the Mackinac Center are properly cited.