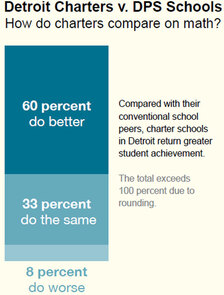 For some Michigan families, the best hope for education lies in an unlikely source. There is a system of schools that helps students learn more, at a lower cost. These schools do not have the luxury of guaranteed enrollment — students must choose to attend. And if these schools fail to deliver on the promises made to justify their existence, these schools are shut down.

Despite their increased accountability, and despite receiving less money, many of these schools have a mission to serve students in some of Michigan’s poorest neighborhoods. Incredibly, these schools have posted even greater educational gains for their students than their conventional counterparts have done for their own students.

These schools are charter schools. And though Michigan charter schools have a demonstrated track record of producing better academic outcomes at a lower cost, there is a concentrated, coordinated campaign to block more students from attending these schools.

No other examination of Michigan charter schools comes close to the rigor of the CREDO study, because the study examined individual student academic growth, and controlled for many external factors, including student socioeconomic status, gender, and past test performance.

CREDO, which has studied charter schools throughout the United States, said in 2013 that Michigan is “among the highest performing charter school states” the research center had ever studied. This March, CREDO highlighted Detroit as one of four cities that “provide essential examples of school-level and system-level commitments to quality that can serve as models to other communities.”

And yet, critics — including some legislators, some State Board of Education officials, and the Michigan Education Association — have mounted a vocal campaign against charter schools. One columnist has claimed that charter schools “exploit children.” The state superintendent has recently called for stopping new charter schools from opening. And yet, the most rigorous findings on charter school performance have been ignored during this debate.

It is easy for critics to obfuscate the issue.  The most important fact about Michigan charter schools is that they are primarily located in urban centers and enroll a very large share of students from low-income backgrounds. As a result, any comparison of charter and conventional school performance that does not take student socioeconomic status into account is misleading, and cannot be taken seriously.

Consider Pontiac: Barely half of the district’s students managed to graduate from high school in four years, and Pontiac high school test scores are far below the state average. Not surprisingly, close to 2,000 Pontiac students chose to leave for schools in other districts. Another 3,000-plus students in the Pontiac area have opted to attend charter schools. State officials cannot blame families for seeking better alternatives. Nor should they penalize charter schools for trying to offer a better option.

Those seeking to limit educational choice must explain why they are ignoring the most rigorous studies of charter school performance. And, they must justify their decision to put the needs of school districts ahead of the very families those districts have failed to serve.

Audrey Spalding is director of education policy for the Mackinac Center for Public Policy, a research and educational institute headquartered in Midland, Mich. Permission to reprint in whole or in part is hereby granted, provided that the author and the Mackinac Center are properly cited.