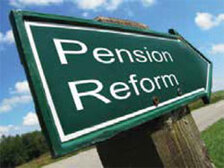 The Legislature can make a difference for future generations by taking on pension reform and other tough issues.

For the first decade of the 21st century, the Michigan Legislature’s policy direction was to increase the power of government at the expense of residents. The results were predictable to those who understand incentives and how economies work.

From 2001 to 2010, compensation costs for the average state employee increased tremendously, while incomes plummeted for the taxpayers who pay the bill. When state revenues stagnated, the Legislature took more from individuals and small businesses through higher income and business taxes, and increased excise taxes on goods such as tobacco.

Early indications show a House and Senate willing to tackle some of the tougher reforms. The House GOP “action plan,” which lays out legislative priorities for the body, is excellent and would provide real reform.

Rather than enact reforms that encourage investment and entrepreneurship, legislators turned to central planning. The state’s corporate welfare arm, the Michigan Economic Development Corporation, was expanded. This well-paid bureaucracy transferred ever-larger sums from taxpayers to politically connected firms through tax breaks and subsidies. For example, film production subsidies exploded, redistributing about $500 million from state taxpayers to Hollywood producers since 2008.

With many failed promises and little transparency, the MEDC granted long-term deals to favored firms, gifts that keep on taking from Michigan taxpayers. In 2014 alone, the cost was around $860 million, and the budget bleeding will continue for years to come. By nearly all measures, these programs have been a colossal failure.

Regulations and mandates also exploded. The number of criminal statutes continued to grow, while licensure and permit mandates were imposed on more occupations and activities. The state’s alcohol regulatory regime maintains a distribution monopoly and price controls, leading to higher prices for consumers. In 2008, Michigan handed back a virtual monopoly to big power companies while slapping a costly 10 percent “renewable energy” mandate on electricity generators — a double-whammy of inefficiency and higher costs for consumers. Michigan is now one of the most regulated states when it comes to employment and has the highest electricity costs in the Midwest.

In 2010, Republicans were swept into office promising reform, taking the state House and governorship and expanding their majority in the state Senate. Over the next two years, the Legislature passed collective bargaining reforms for government employees, enacted education reforms that loosened teacher tenure laws and expanded school choice, cut business taxes, and scaled back some of the corporate welfare. Lansing mostly held the line on spending, eliminated project labor agreements that increase the cost of government construction, ended forced unionization schemes, required public employees to pay more for their health care and shored up public pension systems.

The icing on this reform cake came at the end of the term, when Michigan became the 24th right-to-work state.

Voters returned the GOP to power in 2012, despite President Obama winning Michigan by 9.5 percentage points. In the same election, voters defeated a series of ballot proposals that would have expanded government and union power.

But over the next two years, as the economy turned around, the Legislature strayed from its initial limited-government approach. It expanded a poorly performing welfare program by passing the Obamacare Medicaid expansion. Although the Legislature finally engaged Detroit’s fiscal problems rather than “kick the can down the road,” taxpayers were forced to bail out Detroit, while city governance reforms were watered down. Corporate welfare schemes were renewed and expanded at a cost of about $300 million per year, and $50 million in annual film subsidies continued flowing down the drain.

Overall, state spending increased by $2.7 billion from 2010 to 2014. And the Legislature decided to place a proposal on the May 5 ballot that would raise $2 billion in new tax revenue while giving Michigan the second-highest sales tax in the nation.

The new Legislature has a choice in the path it wants to take. It should embrace and promote free enterprise and fiscal responsibility over the next two years.

Pass pension reform to stop piling on unfunded liabilities to future taxpayers. Make good on the previously violated promise for income tax relief. Save money by eliminating arbitrary prevailing wage laws. Stop the failed corporate welfare machine. Eliminate licensing and regulatory barriers that impede entrepreneurs. Enforce the right-to-work law that is being ignored by school districts and unions across the state. Pass budgets that put taxpayers and citizens above the system.

Early indications show a House and Senate willing to tackle some of the tougher reforms. The House GOP “action plan,” which lays out legislative priorities for the body, is excellent and would provide real reform.

But now the governing begins, and voters should be watching the Legislature to see which philosophy it decides to embrace.

Jarrett Skorup is digital engagement manager and a policy analyst for the Mackinac Center for Public Policy, a research and educational institute headquartered in Midland, Mich. Permission to reprint in whole or in part is hereby granted, provided that the author and the Mackinac Center are properly cited.