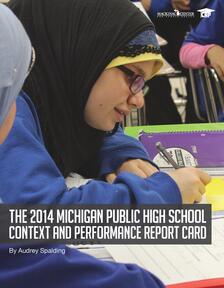 You can read the Context and Performance High School Report Card at www.mackinac.org/17256.

Star International Academy, a public charter school serving low-income students in the Dearborn area, is the highest-ranked public high school on the Mackinac Center’s latest “Context and Performance” report card. This achievement represents years of consistent success: Star was the top-performing high school in 2012, as well.

Though there are many school report cards issued each year, the Center was the first Michigan organization to create a report card that considers the communities in which schools operate. By adjusting for student socioeconomic background, our report card does not penalize schools for serving students in high-poverty areas. Other report cards, including the state’s “Top-to-Bottom” ranking, do not factor in student background and, as a result, tend to reflect student poverty, rather than school performance.

What charter critics fail to recognize is that almost two-thirds of charter school students come from poverty backgrounds, compared to just 39 percent of conventional students.

Though some school officials often have disagreements with other Mackinac Center policy recommendations, one place that we do find common ground is in the grading of schools. Both researchers and school officials know (and have known for decades) that student background can have a tremendous impact on student achievement.

This understanding is critical as Michigan moves toward an education model that holds schools accountable for poor performance. Currently, schools receiving low rankings on the state TTB list can be penalized, or even closed. Since the state ranking is highly correlated with student poverty, this means that the low-ranked schools are predominantly those that serve students in poverty. Indeed, almost 80 percent of students attending the lowest-ranked schools (schools in the bottom 5 percent) come from poverty backgrounds, while the highest-ranked schools (in the top 5 percent) enroll just 11 percent of students from poverty backgrounds.

The state ranking system could be improved by focusing more on individual student academic growth, which is less correlated to student background than on absolute test scores. A bill to implement A-F grading for schools would increase the portion of a school’s grade that depends on academic growth, a step in the right direction.

What charter critics fail to recognize is that almost two-thirds of charter school students come from poverty backgrounds, compared to just 39 percent of conventional students. In many cases, these are the same officials and commentators who have lauded the Center’s criticism of the TTB ranking, or have praised conventional schools we have recognized in our report card. It is not unreasonable to ask these critics to consider the fact that charter schools are serving some of Michigan’s most struggling communities.

As state legislators continue to consider revamping the way Michigan grades schools, and as critics continue to advocate against charter schools, it is important to assess school performance accurately. Failing to consider student background and failing to place a high focus on individual student academic growth will set some schools up for failure. Without considering this context, Michigan runs the risk of penalizing and discouraging schools from opening in the areas where students need them the most.