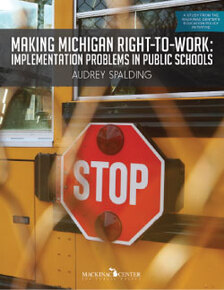 When Michigan’s right-to-work law was passed in December 2012, many hoped it would encourage union responsibility. Under the law, unions would no longer be able to take their members’ dues or fees for granted, and would instead have to prove their worth to members.

But instead of responding with a positive campaign to retain member teachers, school district unions have worked to avoid and circumvent the law. Many times, teachers suffer as a result.

Union officials themselves negotiated for agency fee agreements and the preservation of illegal language.

Wyoming teachers lost as much as $12,700 in salary and benefits when their local union tried to avoid right-to-work. Incredibly, Wyoming union officials agreed to the large compensation reductions for just the appearance that teachers still have to pay union dues.

Wyoming is one of the many school districts with a teacher collective bargaining agreement that raises legal or policy questions under Michigan’s right-to-work law. These districts were identified in the Mackinac Center’s latest policy study, “Making Michigan Right-to-Work: Implementation Problems in Public Schools,” available at: www.mackinac.org/20448.

In the case of Wyoming, though the district’s contract says otherwise, teachers are actually free to leave the union. Wyoming’s contract took effect after the right-to-work law took effect, making the mandatory dues provision unenforceable. In fact, district officials have refused requests from union officials to fire school employees for failing to pay union dues.

Overall, the Center’s study found legal and policy issues with 25 percent of teacher collective bargaining agreements that were put in place after right-to-work took effect (March 28, 2013). These districts employ more than 10,000 teachers, many of whom may have the ability to leave their union, despite contrary language in their district collective bargaining agreement.

The largest number of districts identified are those that have illegal language in their collective bargaining agreements without apparent justification. These districts kept language stating that teachers must pay union dues as a condition of employment, even though the district agreed to the contract after right-to-work took effect. Oftentimes, district school boards approved these illegal contracts unanimously.

In other cases, districts approved “agency fee agreements,” a document requiring that teachers pay union dues, separate from the district’s main collective bargaining agreement. Some of these agreements last as long as 10 years. The Mackinac Center Legal Foundation is representing teachers who are challenging the Taylor School District’s agency fee agreement.

Using collective bargaining agreements to avoid state education reforms is becoming a normal practice in Michigan. When the Michigan Legislature passed a law prohibiting districts from using seniority to determine teacher layoffs and recalls, districts throughout the state approved contracts that ignored it. When the Michigan Legislature passed a law requiring districts to pay teachers based on performance, some districts approved collective bargaining agreements that awarded their best teachers just $1 in merit pay.

Some may defend these illegal contracts by saying that the language was simply “overlooked.” That is a naïve view. Union officials are very aware of what is in a collective bargaining agreement, and how to use them to avoid certain laws.

Doug Pratt, spokesman for the Michigan Education Association, has said that the “sanctity of contracts [is] of the utmost importance to the MEA…,” but it is hard not to conclude that the MEA supports the use of legally questionable contracts. After all, union officials themselves negotiated for agency fee agreements and the preservation of illegal language. These questionable contracts are simply a tactic to stop teachers who want to leave from doing so.

Though it is unfortunate that union officials have sought to avoid right-to-work and other laws with this tactic, they cannot delay the inevitable. As time passes, the questionable collective bargaining agreements put in place by MEA will expire. In the meantime, union leaders should worry about repairing the reputational damage they have incurred by treating some of their members so poorly.