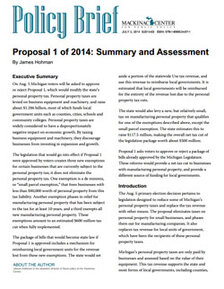 Proposal 1 was a rare bird of policy. Beyond the strange requirement for a public vote, its uniqueness stemmed from what it was — a strategic reduction in an economically inefficient tax without raising taxes elsewhere. Other initiatives to reduce personal property taxes outside of Michigan have been plagued with favoritism problems. Michigan residents can expect a slight improvement in the business climate and an improving economy from certifying this reform.

Instead of selecting alternative taxes and shifting around business tax burdens, Michigan is lowering the burden.

Due to its economic effects, states have targeted these personal property taxes for elimination. Seven states eliminated them and another four substantially reduced these taxes, according to the Tax Foundation. And among our neighbors, only Indiana levies personal property taxes. Even then, the Hoosier State is looking at ways to reduce this tax.

Michigan took a different approach. Proposal 1 did not eliminate the tax, but it is providing some broadly applied exemptions to it. First, it has already implemented exemptions for businesses owning less than $80,000 in equipment in each taxing jurisdiction. This small parcel exemption eliminates will encourage business formation.

Michigan is also exempting manufacturing equipment from these taxes. Businesses will no longer pay personal property taxes on new equipment they purchase and the state will be phasing in relief for existing equipment. There is a small replacement assessment on manufacturing equipment but this tax will be levied at lower rates than the current tax. By lowering the tax burden on these job creators, this will encourage more industrial expansion in the state.

These exemptions, when phased in, will lower taxes by roughly $500 million.

Tax reductions often contain carve-outs for some businesses and increased burdens for others. Michigan’s older business tax was riddled with selecting winners and losers in the tax code. And while commercial enterprises and utility properties are not sharing in the benefits of Proposal 1, the new exemptions are broad-based improvements in the state’s rules for taxing businesses.

Normally, lowering these taxes would reduce local government revenues, and local governments have opposed personal property tax reform in the past. But the state will be essentially earmarking a portion of its own taxes in order to reimburse municipalities and school districts. This is one of the big reasons why there was no organized opposition to the proposal and very likely improved its chances of passing.

It will also mean that the state budget will receive less money over time. But the state expects to have more money over time as well. As part of its 2011 tax reforms, it eliminated a number of selective business tax credit programs. These programs created refundable tax credits for business expansion. Because these credits are only awarded after the companies make their investments, they push the costs if the credit to the future. When these companies receive their last credits, the state will have $500 million more in revenue that is being used to “pay for” Proposal 1.

Instead of selecting alternative taxes and shifting around business tax burdens, Michigan is lowering the burden. It is reimbursing local governments for lost revenue and will be paying for it from an apparent increase in state revenues. This remarkably clean proposal improved the state business climate and the state economy will reap the rewards.