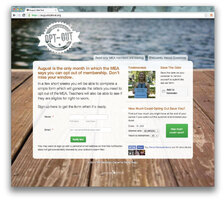 MEA members who wish to resign from the union can visit www.Augustoptout.org for more information.

For teachers represented by the Michigan Education Association, freedom comes just once per year — in August. That’s because the MEA says August is the only month in which they will allow teachers to choose whether to pay union dues.

Under Michigan’s right to work law, teachers now have the option of refusing to pay any money to a labor organization with which they disagree. Previously, teachers who chose to opt out would still be required to pay an “agency” or “service” fee, which was often 70 to 90 percent as expensive as full union dues.

Michigan teachers who want to opt out will likely get little information from the MEA about how to do so. To fill this void, the Center has created AugustOptOut.org.

The MEA has characterized teachers who might opt out of the union this August as “freeloaders,” suggesting that teachers who choose to leave the union are somehow shirking a responsibility, and that their only reason for leaving is a financial one.

The implication that teachers who leave the MEA are doing so in order to freeload is insulting. A large number of MEA members disagree with the union’s political agenda. For these teachers, the decision to leave the union is one rooted in principle.

An internal National Education Association survey found that a majority of its members identified as “conservative,” though the organization spends the vast majority of its political resources to support Democrats. The MEA adheres to the same political playbook.

Peter Boyd, a science teacher at Martin Public Schools, opted out of the MEA because he disagreed with the union’s political positions. Tim Haan, a teacher at Lowell Public Schools, said the same thing, noting that his views are not represented by MEA-backed candidates. Given the national survey results, a majority of Michigan educators likely agree.

Further, high-performing teachers are hindered by policy positions advanced by the union. The National Education Association president just characterized measures of individual student academic growth as the “mark of the devil,” and has vowed to lead a campaign against using that information to evaluate teachers.

Similarly, the MEA has vocally opposed policies that consider teachers as professionals with unique strengths. Under state law, high-performing teachers should be paid more, instead of simply being paid for years on the job and level of degree. The MEA opposed this law, and MEA officials were especially upset when the state offered school districts extra money to comply with it.

The MEA has also opposed state reforms that require teacher placement and layoffs to be based on individual performance. This, too, is a policy that will benefit Michigan’s most effective teachers. By opposing these policies, the MEA is prioritizing less effective teachers over those who do a better job.

Michigan teachers who want to opt out will likely get little information from the MEA about how to do so. To fill this void, the Center has created AugustOptOut.org, a resource for public school employees seeking more information about how to opt out. On that website, school employees can read testimonials from others who chose to opt out, learn about the process of opting out, and even create a letter they can submit in order to stop paying union dues or fees. The site also explains that teachers who do not wish to leave the MEA can simply continue paying their dues and maintain membership.

August is the only month in which the MEA will recognize a teacher’s ability to choose whether to financially support the union. For teachers who would like to leave, it is critical they take care of the necessary paperwork in the next few weeks. Those who don’t will be required to pay for yet another year.