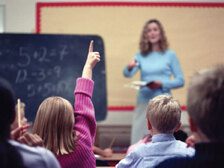 Study after study shows that providing students access to highly effective teachers has a larger impact than anything else schools do.

“Displaced” is what one teacher called it. In 2010, Jackson Public Schools used seniority to dictate who would be laid off and who would be moved into a different position in order to ensure senior teachers stayed in the district ­— regardless of performance. At the time, Jackson wasn’t the only district with this policy. School districts throughout the state used seniority to determine layoff and recall decisions.

As part of an effort to eliminate such policies, the Michigan Legislature passed a set of reforms in 2011 designed to make it easier for district officials to identify, retain and reward effective teachers. These reforms included two laws: Public Act 102, which prohibits seniority-based layoffs and requires student learning growth to be a “predominant” factor in teacher evaluation; and Public Act 103, which gives school officials more autonomy to make personnel decisions by prohibiting districts from collectively bargaining over teacher placement, evaluation and classroom observation, among other things.

In the L’Anse Creuse district … all teachers rated “minimally effective,” “effective” or “highly effective” are considered “equal” when it comes to making layoff decisions.

These new laws promised tremendous change: Districts, such as Jackson, typically laid teachers off on a “last in, first out” basis. Decisions over new teaching assignments were often determined in the same way. In-classroom observation of teachers — part of a teacher’s evaluation — was highly regimented and limited. Some district contracts, such as Brighton’s, prohibited student academic results from being part of a teacher’s formal evaluation.

In contrast, the 2011 reforms give school administrators the opportunity to create new, innovative policies that could reward and retain the best teachers.  Blissfield Community Schools, for example, recently put a policy in place where salary reductions and raises are based on a teacher’s performance. Such policies could make all the difference for Michigan students: Study after study shows that providing students access to highly effective teachers has a larger impact than anything else schools do.

Unfortunately, many districts throughout the state appear to be ignoring these reforms.

The L’Anse Creuse district’s collective bargaining agreement states that all teachers rated “minimally effective” for a single year, “effective” or “highly effective” are considered “equal” when it comes to making layoff decisions. This year, since all 599 L’Anse Creuse teachers fell into these categories, any layoffs in the district would have been entirely based on seniority — exactly what the 2011 reforms were designed to stop.

In another case, the Bay City School District collective bargaining agreement states that any person who wants to observe a teacher in the classroom must submit a written request to the teacher, superintendent and building principal three days beforehand. This appears to conflict with the fact that state law prohibits districts and their unions from collectively bargaining over teacher evaluation and observation.

Several districts, including Allen Park, Avondale, Bay City, Berkley, Chippewa Hills, Fitzgerald, Hastings and L’Anse Creuse actually added language to their contracts stating that if the 2011 reforms are changed,  large volumes of prohibited language regarding teacher evaluation and layoff policy, among other things, would immediately take effect. Since those topics are prohibited subjects of bargaining, adding a provision that requires their immediate implementation if circumstances change could be considered a violation of state law.

District officials are not powerless: The 2011 collective bargaining reforms gave them the authority to strip out prohibited contract language without asking union officials for permission. Several presentations given by labor attorneys to district professional organizations advised officials to remove the language entirely. In a presentation to the Michigan Association of School Board Members, attorneys urged officials to “Just say ‘no.’”

It is regrettable that officials in Bay City, L’Anse Creuse and other districts chose to do the opposite. These laws are an opportunity for officials to run their districts effectively and to put in place policies to help retain their best teachers. By doing the bare minimum to comply, or even less, district officials are shortchanging their students and may even be violating state law.