The World Is Getting Better and Better 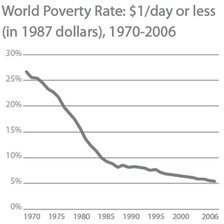 A few years ago, a major worldwide poll found that a majority or plurality of people in most countries surveyed believe that the world is getting worse. Indeed, there seems to be a tendency for those concerned about the size and scope of government to feel like everything is getting perpetually worse. But a full look at the evidence worldwide shows this just isn’t so.

While many critics claim that free trade and globalization are merely a “race to the bottom,” the world as a whole has been quietly reducing poverty, disease, famines and war by embracing the free market.

The dynamism of the world economy is evidence enough of the importance of long-term thinking — countries once written off as lost causes are embracing good ideas and helping their people.

New wealth and mosquito control has meant the plummeting of malaria deaths. The spread of vaccines has reduced or eliminated other health issues like smallpox, diphtheria, rubella and typhoid fever. At the rate the continent of Africa has been improving crop production, the UN predicts an end to famine in Africa by 2025. War and battle deaths are near an all-time low as countries that trade and interact commercially tend to not attack each other.

All of the above positive trends are happening because of an increase in prosperity. The rise in wealth globally, leading to a remarkable decrease in the world poverty rate, is key to understanding much of this progress. University of Michigan-Flint economist Mark Perry has a chart showing this drop in poverty from 26.8 percent in 1970 to 5.4 percent in 2006.

Much of this is the result of formerly Communist and Socialist economies becoming more market-based. China, India and most of South America have been embracing capitalism for decades, while Africa also is moving towards freer markets in more recent years, according to the “Economic Freedom of the World” reports.

The most noteworthy country is China: In the late 1970s, the country began shifting away from its strict model of economic central planning and began freeing up its markets. From 1981 until 2010, over 600 million people climbed out of extreme poverty, at a time when the population increased by 330 million citizens. That’s an average of 1.7 million people every month, or, as a comparison, like a population the size of Idahos’ moving up into the middle-class every month.

In Africa, led by some of the countries in the southern part of the continent, taxes and regulations are being rolled back, private property is being respected, and state-dominated industries are being privatized, shifting to the private sector. Botswana, Zambia and even Uganda (one of the “very least-free” countries 20 years ago) have all become freer in the past few decades — and been rewarded with a steadily growing middle-class.

There are concerns, both domestically and abroad. Several South American countries have elected former or current Socialist leaders in recent years. The latest recessions, which hit most of the world hard, have meant some previous reforms in nations are now being rolled back. And the United States has fallen behind many countries in economic freedom as the regulatory state has greatly expanded.

By their nature, think tanks are supposed to see beyond the momentary political battles which dominate the news headlines every day and focus on the big picture. That’s why the Mackinac Center has been advocating for a right-to-work law for over 20 years — at a time when the idea was ridiculed across the political spectrum. The dynamism of the world economy is evidence enough of the importance of long-term thinking — countries once written off as lost causes are embracing good ideas and helping their people.

While we should cheer this progress, it is important for those of us wishing for a more limited state to be ever-vigilant, because more freedom leads to a better world. The opening up of markets has resulted in an amazing 80 percent reduction in extreme poverty — undoubtedly one of the greatest achievements in human history.

As Arthur Brooks, president of the American Enterprise Institute, recently said, “I will state, assert and defend the statement that if you love the poor, if you are a good Samaritan, you must stand for the free enterprise system, and you must defend it, not just for ourselves but for people around the world. It is the best anti-poverty measure ever invented.”

Jarrett Skorup is a research associate for the Mackinac Center for Public Policy, a research and educational institute headquartered in Midland, Mich. Permission to reprint in whole or in part is hereby granted, provided that the author and the Center are properly cited.