School Consolidation Won’t Save Much 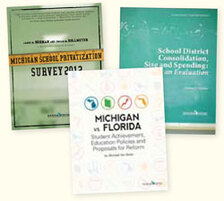 Once again, Michigan education officials are floating the idea of school district consolidation as a cost-savings measure. This time, State Superintendent Mike Flanagan is proposing that school districts be required to centralize certain services at the county or regional level.

From a political standpoint, consolidation is an easy proposal.

Consolidation is not a new idea: Former Gov. Jennifer Granholm proposed spending in 2010 to encourage districts to consolidate. Yet despite officials’ interest, research and recent events suggest that consolidation won’t do much, if anything.

In 2007, Mackinac Center research found that the ideal Michigan school district size appeared to be 2,900 students — as school districts increased in size above that threshold, per-pupil spending increased. Interestingly, the study also found that districts tend to spend more money when they can raise more money from taxpayers. This suggests that school funding may be an issue of incentives rather than an issue of size.

In mid-July, a Michigan intermediate school district actually laid off employees because the services they were providing could be provided more cheaply by a local school district. State education officials should be aware of this: It happened in the Lansing area. The Eaton RESA laid off 24 employees who were providing non-certified instructional support services, and Grand Ledge Public Schools will now be providing those services – for less.

In his letter to Michigan legislators urging them to consider consolidation, Flanagan pointed to Florida’s countywide districts as evidence that consolidation would work, noting that Florida districts spend as little as $6,800 per pupil.

As documented in the Center’s recent study comparing Michigan and Florida, Florida policies include private school choice, a school accountability system that focuses on student educational growth, expanded alternative certification for teachers and the elimination of social promotion of third graders who are not proficient in reading. Michigan has yet to implement any of these reforms.

Florida schools saw dramatic improvement in recent years. But that improvement, along with the state’s relatively stable per-pupil expenditures, has nothing to do with consolidation. After all, Florida has had countywide districts for decades. Florida’s improvement is likely attributable to the state’s recent education policy changes.

Proponents of service consolidation should also consider the cost savings districts have already achieved through privatization. According to Center research, more than 60 percent of Michigan school districts have privatized major non-instructional services. New contracting alone during the 2012-13 school year saved taxpayers an estimated $12.8 million. If this proposal requires districts to contract with public-sector unions instead of outsourcing services to the best bidder, the increased costs could be substantial.

From a political standpoint, consolidation is an easy proposal. Suggesting that Michigan’s education woes are due to smaller school districts allows school officials to avoid addressing outdated forms of teacher compensation, district mismanagement and the tough work that needs to be done to provide students with high-quality educational options.

If Michigan legislators want to see substantial improvement in the public school system, they should look at larger and more meaningful education policy reforms. Consolidation, at best, would do little.