Not Too Late to Close the Pension System 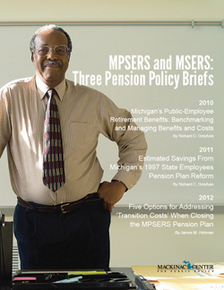 The Mackinac Center has proposed solutions to the underfunded pension system for years. Go to mackinac.org/17128 to read these studies on pension reform.

Legislators and spending interests were positively giddy when the May revenue-estimating conference showed that they would have more money to spend than expected. But a little-reported event in June should dash that feeling: underfunded school pensions, which are constitutional promises of taxpayer dollars, grew far more than the increase in state revenue.

In just the past five years, unfunded liabilities in the Michigan Public School Employees Retirement System more than doubled from $12 billion to $24.3 billion. That includes a $1.9 billion increase in just the last year.

The state should never be in this situation. There’s strong constitutional language that was supposed to ensure that the state paid for benefits as they are earned.

What’s driving this underfunding problem is no secret. The state’s investments have not performed as well as the state assumed. The total amount of payroll in the system, another key funding assumption, has not grown according to state projections either.

People following Michigan policy may remember that the state passed substantial reforms to MPSERS last year. As a positive, the reforms closed defined-benefit contributions for retiree health care, something that few employees in the private-sector receive. Yet the state did nothing to prevent itself from racking up unfunded liabilities for pension benefits. Clamping down on benefits of employees doesn’t help if you continue to underfund the benefits earned.

Legislators instead commissioned a study on the issue. But they didn’t ask the authors to answer the right questions. So the study said very little about the possibility of racking up more unfunded liabilities. Those unfunded liabilities are the primary problem of the pension system.

This year’s gimmick is to attempt to mask the level of the problem. The state will be taking $403.8 million directly out of the budget to make pension contributions instead of distributing the money — and what’s worse for the budget, school districts are required to make larger employer contributions, which policymakers are paying to the tune of $100 million. Unfortunately for future retirees, this money doesn’t even come close to covering the cost, and those shifted funds would have been spent on schools and education. They’re a distraction in lieu of trustworthy retirement funding.

Those contribution rates are substantial. In the upcoming year, most pension payments will cost 22.9 percent of payroll, with 87 percent of that contribution going to pay for the costs of catching up on underfunded benefits. Including the payments for retiree health care will increase the total to 29.35 percent. All told, for every $10,000 a teacher is paid, the state government and school district send the retirement system $2,935; only $122 goes to fund the benefits that the teacher earned.

The state should never be in this situation. There’s strong constitutional language that was supposed to ensure that the state paid for benefits as they were earned. If the state had used adequate estimates about investment performance, it might have had a chance. But the state has been profligate with its assumptions and now has $24.3 billion in unfunded liabilities — just 61 cents for every dollar earned by the system’s members.

Looking back, legislators may be kicking themselves for not closing the pension system and offering a defined-contribution retirement plan to new hires. This would have at least prevented the state from developing unfunded liabilities for new MPSERS members.

Legislators need to stop their ongoing gimmicks, admit that the system is broken and offer new employees benefits that they have no choice but to properly fund.