Iceberg Ahead: Unions May Play Right-to-Work Off on Teachers 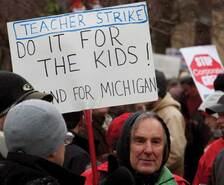 School districts and teachers should take a long look at any proposals by MEA affiliates to renegotiate longer-term contracts.

Michigan made national headlines when it became the 24th right-to-work state: Employers will no longer be able to fire employees who do not join or financially support unions, and this will certainly impact heavily unionized public school districts and their employees.

But, depending on how districts respond in the short term, it could be either beneficial for both or neither.

This new law won’t affect districts for several months or maybe even a few years, since it only applies to new contracts signed after March. Unions, however, likely will try to deny or at least delay this new freedom for employees by getting districts to renegotiate and agree to new long-term contracts before then — forcing school employees, at the risk of losing their jobs, to pay fees to unions.

[Teachers’] potential earnings are limited by the union’s desire to pay all teachers the same no matter their field or proficiency.

To entice districts to help them protect this revenue stream, unions might offer up concessions like reduced wages or trimmed health benefits — and perhaps quite large ones too — that would save districts money. No doubt these offers will look appealing to districts that have struggled to keep labor costs in line for years.

On the heels of the Great Recession and the discontinuation of federal "stimulus" programs, the prospects of school funding have been rockier than ever before in recent Michigan history. Locking in long-term labor costs is hardly the way to stay financially flexible enough to meet the diverse and changing needs of students.

The stakes of this gamble are high: If school boards agree to a long-term deal, there would be no going back.

Unions using this tactic will be letting the interest of union bosses trump those of teachers and other union members. Even without a union security clause, many school employees will choose to continue supporting their union financially. But other workers might value making the union earn their support, especially if they feel their best interests are not well represented.

Further, a long-term union contract might also prevent teachers or other school employees from benefiting if the state increases funding for schools. School revenues are projected to be higher this year than last. Not only would employees be subject to unnecessary concessions, they might also be limited by artificial ceilings on future earnings.

This point helps illustrate why some employees may choose not to pay dues to their union. The union contract that employees are forced to work under is an all-or-nothing proposition, and unions hurt as many employees they think they help with seniority protections, pricey health insurance and rigid salary schedules.

Young employees have traditionally been harmed by these policies, but so are teachers in high-demand fields like science, technology, engineering and math. Their potential earnings are limited by the union’s desire to pay all teachers the same no matter their field or proficiency.

Right-to-work could do much good for public schools, although it might go unnoticed by parents and students. It’s primarily about the relationship between unions and their members, and teachers and school employees stand to gain the most by opting out of paying dues to an organization that doesn’t represent their best interests.

In turn, unions will have to focus on serving their members better. Both of these scenarios will indirectly benefit school districts — if they let them.

Editor's Note: The Mackinac Center for Public Policy maintains a full database of every public school collective bargaining agreement in Michigan. The database was last updated in 2012 and is renewed annually. Citizens are encouraged to check out the contracts for their district and see which have current and expired contracts.