Shouldn’t Enhancing Your Neighborhood Be Up to You? 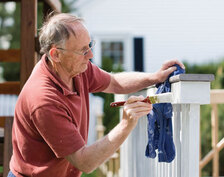 Voluntarily improving homes and neighborhoods makes for stronger communities — stronger than when taxpayers are forced to do so.

Historian James Coffield once described the British income tax system as “scaffolding for plunder,” a construction for more easily completing the task of taking taxpayer money. In the upcoming lame duck session in the Michigan Legislature, that potential task would be facilitating higher property tax assessments.

Unfortunately, Michigan already has several instances of this: government “jobs” and other legal entities like Downtown Development Authorities, Corridor Improvement Authorities and at least 10 others that get little public or media attention, have minimal accountability, and once created are almost impossible to dismantle.

Further, if this were truly a voluntary assessment there would be no need to involve state or local units of government.

A proposed law, potentially on the move during the lame duck session and introduced by Rep. Joseph Haveman, R-Holland, would create yet another version called “neighborhood enhancement districts,” with the power to impose higher property taxes to pay for a wide range of projects favored by local planners. Supporters of the bill say it will “empower” locals to raise more money to enhance their area, but all it really enhances are local government taxes, spending and power. No vote of the people would be required.

The bill does empower local planners to borrow and spend for faddish projects such as pavilions, amphitheaters, snow-melt systems and surveillance equipment, the razing of “nonconforming structures” and yet more government recreational programs and facilities. Governments could also increase property taxes without a vote of the people to “engage in promotional or marketing activities” and to provide broadband or other telecommunications services.

There is much wrong with this bill.

In units with local prevailing wage laws, money may be wasted simply by paying union scale wages for the construction projects or by government escaping its proper limits.  For example, had a state film subsidy program not skewed local government incentives, the city of Allen Park would never have taken on massive debt for a film studio whose collapse has brought the city to the edge of bankruptcy and the appointment of an emergency manager.

In response to previous criticism leveled by this author at the plan, one government official in the Grand Rapids area disputed the notion that these new levies would be taxes. It is “a voluntary assessment, not a tax increase,” he said. While some of the bill’s language is murky, it is very clear that people who are opposed to the new assessments could still be on the hook for paying them. The proper identification in that case would be a “tax.”

Further, if this were truly a voluntary assessment there would be no need to involve state or local units of government. People could just volunteer their own money to whatever project might be pitched as a real “enhancement” to neighborhoods.

What is all the more remarkable is that this bill could be taken up in the Michigan Legislature during the fall lame duck session just weeks before the federal government’s “Taxmageddon” kicks in; that is, around the same time American taxpayers are separated from another $494 billion as a result of expiring tax cuts and new Obamacare taxes. A better tack is to let local governments live within the tax constraints they have now and leave “enhancements” to peaceful, voluntary association.

The new legislation would create another vehicle for making people pay higher assessments on property, whether they like it or not; ill-advised tax grab opportunities; a wealth transfer from the many to the few; and no guaranteed improvement in social welfare. This should be stopped before it gets started.