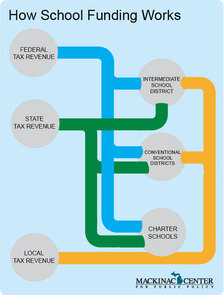 The start of school is an important and exciting time for students and parents, but the most important day for school districts — “Count Day” — still lies ahead. Districts will be luring kids to school on this day of all days by handing out prizes, pizza and, in the case of Detroit Public Schools, sneakers. A recent change to the state’s school funding system, however, should diminish the large fiscal stakes tied to count days, and encourage districts to remain focused on serving students on every day of the school year.

School districts primarily rely on state funding and are held accountable to state standards, so it follows that they should be able to serve any student in the state.

This reform flew under the radar, especially with so much legislative energy devoted to modifying the perennially underfunded school employee retirement system. Additionally, many school officials may overlook a technical change such as this, since most of them appear more concerned about how much money schools will get compared to how they get it. Nevertheless, the changes could have significant and positive effects that will benefit students.

The plan is quite simple. School districts will now be able to collect state funding on behalf of students they enroll after Count Day. For every day these students are in attendance, districts will receive a daily prorated amount of state aid. Perhaps more importantly, if these students were counted by a different district on Count Day, that district would have its state funding reduced by the same amount.

This change is welcome for several reasons. First, Michigan’s 548 school districts respond to incentives, just like all other organizations and individuals. And this reform creates financial incentives for school districts to better serve students. They will be rewarded when they enroll (and keep in attendance) students throughout the entire school year, instead of on just one day. This means districts would benefit by doing what they can to prevent students from dropping out or transferring to another district. To be effective at this, districts will have to perpetually pay close attention to the individual needs of each student.

Second, this plan helps reduce the chances that the state will pay districts for students they are not actually educating. The Garden City school district, for instance, had an average of about 140 more students in its fall student counts than in the spring from 2009 to 2011. During these three years, it’s likely that the district received a surplus of $1 million from the state on behalf of students no longer enrolled.

Finally, this new funding method gives students and parents more control over their public school options. If parents grow dissatisfied with the school where their child enrolled on Count Day, they’ll be much more likely to find a nearby district ready to meet their needs, because that district will now be financially rewarded for doing so. When districts compete to serve students, parents win.

This seems to be exactly the type of reform Gov. Rick Snyder is aiming for by attempting to rewrite the entire school aid act. The Governor should explore even more ways to use state education funding to encourage districts to better serve students and provide them with more learning opportunities. The state should, for instance, permanently enable all districts to receive funding on behalf of students who are enrolled in more than two online courses. The Legislature should also allow districts to collect funding for enrolling students from anywhere in the state. School districts primarily rely on state funding and are held accountable to state standards, so it follows that they should be able to serve any student in the state.

The Legislature should be commended for reducing the importance of count days by modifying the state funding formula. It will help reduce the fiscal and educational costs of high stakes count days, a problem that many people agreed should be addressed. As always, the state can and should do more though to closely align funding to student learning, and provide rewards for schools that best meet student needs.