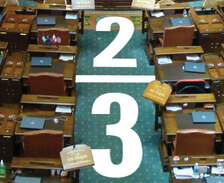 The Michigan Legislature could only raise taxes with a two-thirds majority if voters approve a proposed ballot measure in November.

Among the many proposed initiatives that may appear on the November ballot is one that would constitutionally prohibit the Michigan Legislature from raising taxes without a two-thirds majority vote in both the House and Senate. The idea behind such restrictions is to make it harder for the political class to extract ever more dollars from already beleaguered taxpayers. The initiative is being advanced by a group called Michigan Alliance for Prosperity.

The ballot proposal would read:

Tax limitation amendments limit the ability of politicians to ignore real reforms and simply reach deeper into the pockets of taxpayers.

A proposal to amend the Michigan Constitution by adding a section 26a to Article IX: No new or additional taxes shall be imposed by the state government, nor shall it expand the base of taxation, nor shall it increase the rate of taxation unless: (a) by the vote of two-thirds of all the elected members of each branch of the Legislature; or (b) by a statewide vote of Michigan electors at a November election. This section shall in no way be construed to limit or modify tax limitations otherwise created in this constitution.

The timing of this bill is made all the more interesting and relevant because the United States is facing a one-year federal tax hike in 2013 of nearly $500 billion. This is due in part to expiring tax cuts originally passed during the Bush administration. At least at the state level there is an opportunity to limit adding insult to injury with higher, state level-taxes (such as hiking gas taxes).

Restrictions preventing legislators from raising taxes with a simple majority vote are commonly referred to as “Tax Limitation Amendments” and can be found in roughly 16 states, depending on how you tally them. Americans for Tax Reform — a Washington, D.C.-based taxpayer group — notes that not every state enshrines their restrictions in their respective constitution as the Michigan Alliance for Prosperity initiative sets out to do.

If such an amendment had been in place in 2007, Gov. Jennifer Granholm and the Legislature would have failed to impose a $1.4 billion tax hike on Michigan businesses and families. That increase — which included an
11.5 percent jump in personal income taxes — was supposed to put Michigan on firmer fiscal footing. It did nothing of the sort and before leaving office Gov. Granholm was proposing yet another tax increase.

The official MAP website claims that states with tax limitation laws or amendments have overall tax burdens generally 8 percent to 23 percent lower than states without such limitations.

Michigan Information Research Service, a Lansing-based political newsletter, reports that an organization by the name of Defend Michigan Democracy will oppose the effort and its supporters include the Michigan Education Association, Michigan Corrections Association and the Michigan State Council of Service Employees.

In order to get an initiative on the ballot, organizations must submit 300,000 or more valid signatures to the Michigan Bureau of Elections office. MAP submitted more than 600,000, a large margin for any signature collection errors.

Mackinac Center analysts have written extensively on both tax and spending constraints in the past regarding the constitution’s Headlee Amendment and proposals commonly known as a Taxpayer Bill of Rights, including the 2006 “Stop Overspending” proposal that failed to garner enough signatures to be placed on the ballot.

Given the din of noise related to other proposed initiatives — such as the controversial Protect Our Jobs Amendment — few may realize that MAP is working to place such a tax limitation on the ballot. They should be aware of it as it appears bound for the ballot and may, unfortunately, get swept up in a “vote no against everything” fervor that some in Lansing appear all too ready to advance.

Michael D. LaFaive is director of the Morey Fiscal Policy Initiative and Ethan Davis is a 2012 fiscal policy intern at the Mackinac Center for Public Policy, a research and educational institute headquartered in Midland, Mich. Permission to reprint in whole or in part is hereby granted, provided that the authors and the Center are properly cited.