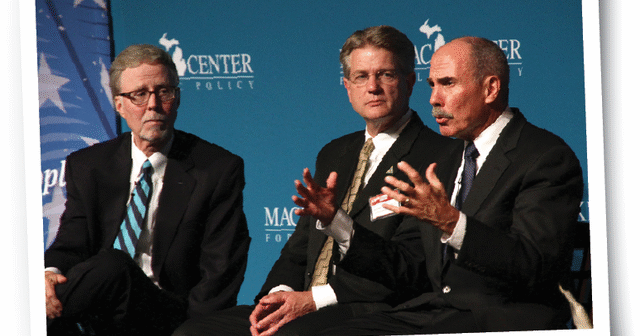 On May 23, the Mackinac Center for Public Policy hosted an open conference in Lansing on the future of “online learning,” which delivers academic instruction through the Internet. The speakers were former West Virginia Gov. Bob Wise, Oxford Community Schools Superintendent Dr. William Skilling, and Michigan Superintendent of Public Instruction Michael Flanagan.

The evening’s presentations on the online instructional achievements in Michigan and U.S. classrooms were fascinating, but what also stood out was an unexpected consensus among the speakers on a typically divisive issue: the involvement of the private sector in public education. The result was an exhilarating picture in which public school teachers, rather than being threatened, could achieve transformational improvements in their personal job satisfaction.

“I’m having trouble understanding this issue. I’m a public-sector guy, a public school guy. In 1836, the first McGuffey readers were sold to a school district. The private sector has been an integral part of education ever since, really, the dawn of education in this country.”

The private sector’s role in public schools is not a primary policy issue in online education. People may favor the use of Internet-based instruction, but prefer that it be produced by a public school or government agency rather than one of the many private providers.

So it was an uncertain moment when a question from the audience was read to the three speakers: “In the debate about online learning, there’s a lot of talk about for-profit companies who are operating in (online education). Is this something we need to be concerned about?”

Yet no divide emerged. State Superintendent Flanagan began by saying, “In general, no.” He observed that public and private providers should be held to the same standards, adding: “Sooner or later if you’re not in this for the right reason and you’re not getting results, it will be seen. … If there is a private company that gets into this business and doesn’t produce results, it’s going to go away.”

Gov. Wise was direct: “I’m having trouble understanding this issue. I’m a public-sector guy, a public school guy. In 1836, the first McGuffey readers were sold to a school district. The private sector has been an integral part of education ever since, really, the dawn of education in this country. … For school buses, for pencils for the elementary school, for calculators, for textbooks, the private sector has been involved from Day One.” Private providers who don’t deliver, he added, should be dismissed.

Not surprisingly, Superintendent Skilling said that he didn’t “feel threatened by private entities.” He argued, “I think it’s just another way to sharpen us up as superintendents, as school leaders, to do an even better job than what we’re doing.”

Do public school teachers have no grounds for anxiety? All the speakers agreed that teachers would need to adapt to work in tandem with online instruction. But as Gov. Wise noted, “In a blended environment, the teacher is the most important element.”

He added that in interviewing teachers who employ online educational tools, “What we heard time after time was how entering this environment had rejuvenated them and their interest in their career — and not just young teachers, but teachers much older, … saying: ‘You know, I’m doing things I never thought I’d be able to do. I have a freedom now, and incidentally, I don’t take home a hundred exams to grade or papers to grade every night.’ ” Michigan teachers using online tools have told Mackinac Center staff that they would never go back to traditional methods.

Change presents challenges; all of the speakers were clear about this. But change is also a sign of life, for both the teaching profession and the public school system. Fittingly, that’s both a private and a public benefit.

Thomas A. Shull is senior editor at the Mackinac Center for Public Policy, a research and educational institute headquartered in Midland, Mich. Permission to reprint in whole or in part is hereby granted, provided that the author and the Center are properly cited.