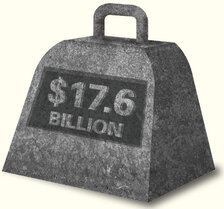 The unfunded liability in the public school employee pension plan has become a burden.

If Lansing policymakers want to ensure that more money “makes its way into the classroom,” they will need to reform state government’s public school pension fund. School districts now send an amount equal to nearly 16 percent of their total employee payroll into the coffers of the state pension fund, while school employees on average are forced to contribute more than 5 percent of their salary as well. For the sake of teachers and taxpayers alike, the state should close its pension fund to new employees and offer them 401(k)-style retirement savings accounts.

A 2011 Mackinac Center study estimated that the state avoided up to $4.3 billion in unfunded liabilities by closing the state employee pension plan to new members in 1997.

The most recent statistics show that as of September 2010 the state had saved $43.3 billion toward the $60.9 billion worth of pension benefits earned by public school employees and retirees. The massive $17.6 billion gap between the fund’s savings and liabilities means school districts must make additional payments each year. Defraying the unfunded liability will take 26 years, according to the most recent actuarial report.

These payments on unfunded pension liabilities, along with the cost of the generous pension benefits, mean that for every dollar paid to school employees, districts need to send an additional 15.96 cents to the pension system. Ultimately, taxpayers bear this expense, since the majority of school revenues come from sales, property and income taxes.

These large pension contributions are a problem for school districts, and they are well outside the norms of the private marketplace. A 2010 survey of 24 major Michigan private-sector employers found that none of them offered new hires pension benefits based on final-pay, as the state does in its public school employee pension plan. Such “defined-benefit” plans are disappearing. Private-sector employers now largely offer 401(k)-style “defined-contribution” retirement benefits that cost employers an amount equal to around 5 percent to 7 percent of employee payroll.

In a defined-contribution retirement system, employers and employees make deposits into an employee’s tax-favored retirement account. The employee directs the investment decisions and uses the accumulated savings upon retirement.

Some legislators have objected that closing the school employee pension fund would result in substantial upfront “transition costs,” despite saving money in the long run. As I show in a new Mackinac Center study, however, these costs are nonbinding and discretionary.  Legislators can work around them if they choose. The benefit would be substantial: A 2011 Mackinac Center study estimated that the state avoided up to $4.3 billion in unfunded liabilities by closing the state employee pension plan to new members in 1997.

Another common objection to switching new school employees to a defined-contribution plan is that doing so creates excessive market risk for retirees — that their money is better off in the hands of state pension managers than in their own.

The state’s pension funds do not negate market risks; however, the taxpayer bears the burden. Indeed, the large sums that now must be set aside to catch up on the pension plan’s unfunded liabilities — equivalent to 12.49 percent of public school payroll — show that taxpayers and school districts are paying for those risks.

There is another problem with collectivizing a risk that is individual. It does not matter to state pension managers whether an individual school employee has a high risk tolerance or not — pension investments are made to “achieve [the] optimal rate of return possible with prudent levels of risk,” according to the state Department of Treasury.

But individuals have different risk preferences: Some are aggressive investors, while others are conservative. A defined-contribution plan would allow new school employees to pick investments that better suit their preferences.

Of course, some new employees might prefer the status quo. The current pension plan is a mess, however, and state reports predict that it will remain one well into the future. Transitioning to a defined-contribution retirement system will go a long way to ensuring that the Michigan public school system offers retirement benefits that meet the needs of both taxpayers and school employees.