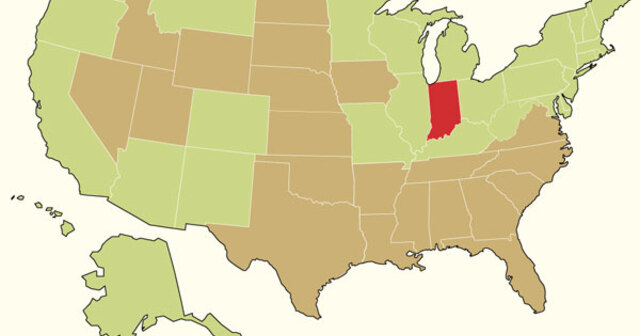 Indiana (shown in red) already has the greatest concentration of manufacturing jobs as a percentage of total jobs of any state in the country. Adding right-to-work protections for employees and employers will give the Hoosier State an even greater advantage over Michigan. (Right-to-work states on this map are shown in brown. Forced-unionism states are in green.)
Publications / Viewpoints

(Editor’s note: This is an edited version of a commentary that appeared in the Detroit Free Press on Jan. 22, 2011.)

The state of Indiana is now America’s 23rd right-to-work state. Michigan may need to adopt such a law to better compete for jobs and talent.

Research shows that states with right-to-work laws arguably are better off economically. They have typically enjoyed higher rates of economic and population growth and lower unemployment rates. I say “arguably” because academic research on the question is generally mixed. On balance, however, the best scholarship seems to demonstrate that right-to-work status can be a powerful development tool. Even if it were not, such laws should still be adopted in the name of individual liberty.

Economic theory and evidence shows that lowering the price of something encourages more of it, so a right-to-work law in Indiana could mean greater population loss here.

This study has two vital implications. First, it shows the impact that state-level public policies can have on economic development. Second, it neutralizes claims by right-to-work critics that some other impossible-to-measure variable — such as attitudes toward unions — is unduly influencing economic performance in right-to-work states.

This is not to say that passage of a right-to-work law in Indiana will result in an increase in border county manufacturing employment by one-third. As Holmes points out, right-to-work states are typically pro-business to begin with. Indiana’s adoption of a right-to-work law may simply formalize its status while implicitly magnifying Michigan’s reputation for being more hostile to business.

A more recent (2012) study comes from Michael Hicks, an adjunct scholar with the Mackinac Center. Writing for Ball State University’s Center for Business and Economic Research, he found that from 1929 through 2005, the presence of a right-to-work law did not play a role in state industrial composition or income from manufacturing.

Economist Richard Vedder’s 2010 study “Right-to-Work Laws: Liberty, Prosperity, and Quality of Life” in the Cato Journal tackles such laws from a migration angle. For many researchers migration reflects an investment in oneself, and helps aggregate “quality of life” issues into a single variable.

These changes are probably more than just a coincidence. Vedder performed a number of statistical analyses that controlled for variables that might also influence moves, including weather. His conclusion was that “without exception … a statistically significant positive relationship was observed between the presence of right-to-work laws and net migration.”

Other variables mattered too, but his research underscores the argument that people “vote with their feet to move to freer labor market environments.” This too has important implications for Michigan, because Indiana is a border state. Moving there from here for work is less expensive financially and psychologically than, say, to Texas. Economic theory and evidence shows that lowering the price of something encourages more of it, so a right-to-work law in Indiana could mean greater population loss here.

Michigan should consider its own right-to-work law. Doing otherwise would allow Indiana to cement its reputation as a friendlier climate in which to live and do business to the detriment of the Great Lake State.