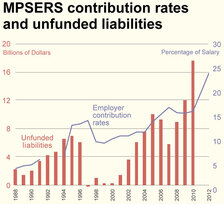 Over the past 25 years, the required contributions to the teacher’s pension system grew substantially as the state developed massive unfunded liabilities.

Michigan has been at the forefront of reforming its retirement system for state employees. It is time to do the same for the state-run school employee pension plan.

In 1996, Michigan was one of the first government pension systems to convert to a defined-contribution 401(k) plan — but it only applied to those who work for the state itself, not school employees. All new state employees hired since then are offered up-front contributions to individual retirement accounts. Those hired previously are still covered by a conventional “defined-benefit” system, with pension fund contributions calculated by actuaries using assumptions imposed by politicians.

No comparable reforms have been enacted for the teachers’ retirement system, which operates at an unfunded liability four times larger than the state plan.

State governments are notoriously bad at estimating how much will be needed to cover a lifetime of future pension payments for retired employees. Key to this is the assumption that its investments will return 8 percent annually. This has been problematic and unrealistic. The state’s returns have been substantially less, averaging only 5.7 percent since 1997. Assuming a higher investment return reduces the amount needed to prefund, but missing that assumed rate of return means that gaps develop between what has been saved and what the state expects to pay out.

This is compounded by policymakers’ decision to mark pension fund assets to market value just before the market crashed in 2008. This move allowed the state to contribute nearly $200 million less to the retirement system for a year, but caused spikes in underfunding afterwards. State underfunding doubled from $6 billion after the adjustment to $12 billion since the move.

Even under these altered rules, legislators have failed to provide the required contributions in annual budgets. In the past decade, the state underpaid its needed retirement benefits by $1.46 billion.

According to a recent state report, Michigan’s retirement funds will have to earn more than 11 percent on its investments on average for the next 10 years to get back to fully funded status without a bailout.

Despite the dire situation of its teacher pension fund, however, Michigan has been ahead of the curve nationally in reforming its state employee pension system. With its 1996 state employee reforms, Michigan has saved up to $4 billion in unfunded liabilities. The system is still underfunded, but less so than many other states.

Last year, Michigan took another big step toward long-term fiscal sustainability by also reforming the health benefits the Legislature has chosen to give retired state employees, following the lead of some of the state’s local governments.

By offering a defined-contribution plan and cutting back on retiree health expenses, the state has been a leader in reforms. But this has only applied to the state employee pension system. No comparable reforms have been enacted for the teachers’ retirement system, which operates at an unfunded liability four times larger than the state plan.

The school pension fund is different than the state pension fund because there are school districts everywhere, while state employees are concentrated in Lansing. There are 243,000 members in the teachers’ retirement system, while the state system has only 54,000. School employees make up a substantial number of constituents in every legislative district.

While state and school employees and retirees should be more concerned with ensuring that the retirement benefits are affordable and that enough money is set aside, they have typically risen in opposition to any changes to their retirement benefits.

The school employee retirement system is both overpromised and underfunded. It’s also unfair to the taxpayers who provide benefits that few in the private sector receive, and it’s imposing unsustainable burdens on local school budgets, requiring districts to contribute an amount equal to one quarter of each employee’s salary into the fund. Anything less than the reforms already in place for state workers should be considered a failure.

James Hohman is assistant director of fiscal policy at the Mackinac Center for Public Policy, a research and educational institute headquartered in Midland, Mich. Permission to reprint in whole or in part is hereby granted, provided that the Center and the author are properly cited.