State of the State: How to Move Michigan Forward 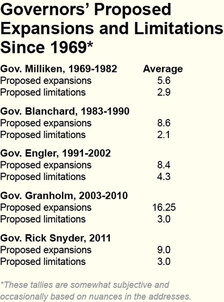 Gov. Rick Snyder and the Legislature deserve considerable credit for improving Michigan’s public policy landscape during the last year. But with much work still to be done, what changes will occur in 2012?

The governor will announce his policy proposals in an upcoming State of the State speech, perhaps as early as January. A key indicator of Michigan’s future will be whether he forgoes expansions of government influence in our lives — and suggests some key limitations as well.

Gov. Snyder has made progress in getting the state back on track. He will honor that progress — and the people of Michigan — if he continues to streamline an expensive and demanding state government.

Counting the proposed limitations and expansions of state government in State of the State speeches is one method the Mackinac Center has used to gauge each governor’s willingness to trust Michigan’s residents, since these proposals indicates how much control over people governors believe Lansing should exercise. Last year, for instance, Gov. Snyder proposed nine expansions and three limitations. That’s the bad news.

The good news is that friends of freedom probably received more than they might have hoped. The state business tax was simplified and trimmed by $600 million; unemployment benefits were reduced by six weeks, saving taxpayers $240 million annually; and schools and municipalities were offered incentives to reduce their annual costs.

The Michigan Economic Growth Authority, a so-called “jobs program,” was mercifully put down; the scope of film subsidies to private business was significantly reduced; costly project-labor agreements were ended; and Michigan’s archaic item-pricing law was repealed. There were a few missteps, such as the new pension tax, but on balance, it was a good policy year for the Great Lake State.

The Mackinac Center’s tallies of proposed government expansions and limitations go back to Gov. William Milliken’s 1969 address. Obviously, our counts are not a precise measure of a governor’s proclivity to tell us what to do. It’s sometimes difficult to classify a policy — is a targeted tax credit a limitation or expansion? — and sometimes a governor’s actions diverge from his or her proposals. Still, the count indicates an administration’s attitude toward government.

Remarkably, in 1974 Gov. Milliken promised no new expansions of state government, a feat that has yet to be matched by any subsequent governor. His 1974 speech is what a State of the State address should be: short and sweet. It covers 550 words, or about six minutes with polite applause. In many ways, it is a model for the speech Gov. Snyder should give. Consider this Gov. Milliken line: “They (Michigan residents) want us to meet their priority needs while preserving the largest tax cut in Michigan history — and cutting taxes further when possible.”

With zero new proposed expansions of government, Gov. Snyder would be off to a good start. But he should consider several limitations that would free the money and creative energies of Michigan’s people:

Gov. Snyder has made progress in getting the state back on track. He will honor that progress — and the people of Michigan — if he continues to streamline an expensive and demanding state government.