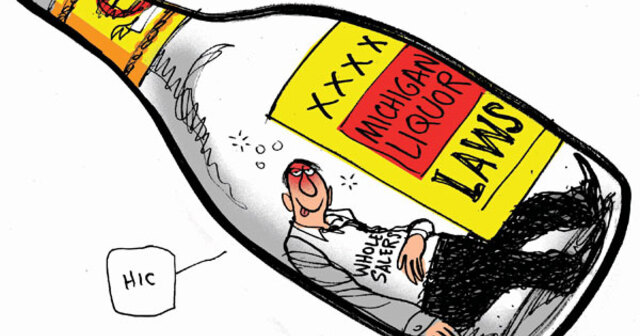 Two months ago, I dispatched 15 major Mackinac Center policy recommendations to members of Gov. Rick Snyder’s 21-member Liquor Control Advisory Rules Committee. This committee first met in August, and it may suggest reform as early as this month. Its task is to recommend improvements to Michigan’s system of alcohol control, a strange and distorted vestige of the end of Prohibition.

Appearing below are eight Mackinac Center recommendations that affect the sale of beer and wine in Michigan. Currently, beer and wine wholesalers constitute a small group of lucky monopolists with regulatory privileges that likely hike costs dramatically for consumers. Real reforms must start by ending every unfair legal advantage protecting these wholesalers.

Do so many florists have questionable backgrounds that none should be licensed? We’re talking about mums, not mobsters.

Eliminate the beer and wine distributor monopoly on territory. Strip from the Michigan Liquor Control Code the requirement that suppliers of beer and wine grant exclusive sales territories to a select group of wholesalers. This mandate prevents competition, shackles suppliers and raises costs for consumers.

Eliminate the “post and hold” rule from the state administrative code. “Post and hold” is tantamount to state-mandated price collusion.
It orders manufacturers and wholesalers to post beer and wine prices and then maintain those prices for a prescribed period of time. One study suggests that such rules keep prices 8 percent to 30 percent higher than they would be otherwise.

Allow suppliers to distribute their own products as they wish. Currently, Michigan law prohibits owners of, say, microbreweries from having an ownership interest in a wholesale distributor or another alcohol retailer. This archaic prohibition discourages business expansion. Some
32 other states explicitly allow some degree of self-distribution.

Remove Michigan government from liquor wholesaling. Currently, Michigan buys almost every legal drop of spirituous liquor before it’s resold to consumers. Mackinac Center research indicates that liquor prices are higher on average in states where the government acts as the middleman. These higher prices likely drive people who would otherwise buy liquor to consume beer and wine instead. This “substitution effect” simply reinforces the advantages enjoyed by beer and wine monopolists.

Allow all businesses to apply for licenses for spirits and for beer and wine. Florists, as one example, may be able to improve business by selling champagne with their flowers, if only they were legally permitted to. Do so many florists have questionable backgrounds that none should be licensed? We’re talking about mums, not mobsters.

Repeal the limit on the amount of alcohol that bars, restaurants and other alcohol retailers can purchase from other retailers. Currently, each month, an on-premise alcohol retailer can purchase only nine liters of spirits and no beer and wine — again to the benefit of monopoly wholesalers — from another retail store. The state should take no interest in prohibiting purchases by one licensed entity from another. All licensees are investigated in the licensing process anyway.

Delegate “entertainment” permitting to local government. A hearing was once held by the Michigan Liquor Control Commission over a fine involving Polka dancing at a bar that served beer. State commissioners actually took testimony from a police officer on what he thought constituted a dance move. Surely state regulators’ time can be better spent.

Michigan’s byzantine alcohol control system has long been in need of reform. As recently as 2005, a special state “customer advisory committee” convened, and submitted 10 reform recommendations, but these were essentially ignored. If Gov. Snyder and Legislature want to see state policy discriminate less between businesses and encourage entrepreneurial dynamism, adopting the ideas presented above is a good start.