Do We Really Need a Unionized State Government? 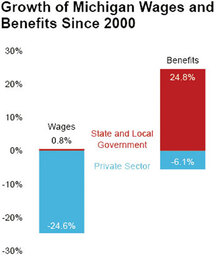 It is entirely appropriate for Michigan residents who pay taxes in order to fund government operations, and voters who have a hand in selecting leadership, to think of government as their enterprise, and government employees as their employees. And, having taken on a frame of mind where they are “the boss,” it is worthwhile for taxpayers and voters to consider the fact that more often than not bosses prefer to run their companies union-free.

The question then becomes: Should government be any different? Should taxpayers and voters be any more welcoming of unions in their government than private companies are of unions in their shops? There is plenty of reason for taxpayers and voters to say no, that unionized government is no more desirable for them than a unionized factory is for a company that wants to turn out quality products and sell them at a competitive price for a profit.

The good news is that the state is not forced to bargain collectively with employees, under either federal law or the state Constitution.

The state of Michigan has long had a heavily unionized workforce, organized under rules established by its Civil Service Commission. Rather than setting wages and benefit packages for state employees after balancing labor market financial conditions, the state bargains collectively with unions over compensation and work rules.

Unionized state government has driven up costs, that much is fairly clear. According to a report from the state’s budget office, released at the end of September, the state’s payroll declined by 12,900 employees between 1999 and 2009 as the state shed 21 percent of its workforce, but the cost of this workforce increased by 38 percent.

The primary driver is the cost of employee benefits, which increased from $898 million in 1999 to $1.8 billion in 2010. Health insurance costs jumped from $368 million per year to $658 million — again, despite having fewer employees.

These figures should raise red flags, regardless of one’s political outlook. For conservatives and free-market supporters who value low taxes, increased employment costs mean even a smaller government is more expensive than it needs to be. For those who place a value on an active government that provides a wide range of social and educational services, high government employee costs mean fewer government workers to do so. Yet government employee unions in Lansing stubbornly refuse to negotiate concessions that would prevent layoffs and furloughs.

Union recalcitrance can have a steep cost. When government unions refused to consider changes to their current contracts, the state was forced to develop plans to leave 367 positions in state government unfilled and schedule at least four furlough days for state employees.

The good news is that the state is not forced to bargain collectively with employees, under either federal law or the state Constitution. The state’s Civil Service Commission could do away with collective bargaining privileges and set up a wage and benefits system that maintains essential services without breaking the state’s budget or taxpayers’ bank accounts.

In the place of collective bargaining the state could institute a more informal consultation process, or it could strengthen the state’s civil service rules to protect employee rights. Policymakers should borrow from the experience of private-sector firms throughout the state that have learned how to build good relations with their employees without the need for a union. In place of a rigid, expensive state workforce, taxpayers and employers would benefit from a government where employees receive a competitive wage and benefit package, and the work of governing goes more smoothly.

Paul Kersey is director of labor policy and James Hohman is assistant director of fiscal policy at the Mackinac Center for Public Policy, a research and educational institute headquartered in Midland, Mich. Permission to reprint in whole or in part is hereby granted, provided that the author and the Center are properly cited.