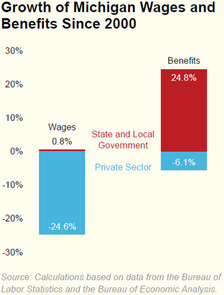 Michigan recently took a big step toward bringing government employee benefits into balance when Gov. Rick Snyder signed Senate Bill 7, which restricts local governments and school districts from offering health insurance benefits that are more generous than those provided to most private-sector employees.

This represents an important shift. Typically, residents of financially strapped communities are told they have just two options: accept higher taxes or fewer services. The new law makes it clear that a third way exists, which is lowering the cost of existing government services — in this case, by up to $1 billion annually if the new law is implemented appropriately.

While these savings won’t go directly into taxpayers’ pockets, residents are likely to see fewer of those false choices to “raise taxes or cut services” in the future.

Specifically, the new law limits the amount a school or local government can pay for employee health insurance, although the caps are still well above private-sector averages. For example, a new $15,000 cap on the amount a public employer can pay for a “family plan” is still 46 percent above the typical private-sector level. (The cap for a single person is $5,500 and $11,000 for a couple.) The caps will be allowed to increase with health care inflation, which increased around 4 percent per year in the past decade — greater than regular inflation.

Alternatively, the law allows public employers to require employees to pay at least 20 percent toward the cost of their health insurance premiums, which is closer to what’s typical in the private sector. Not applying the hard caps when there are high premiums dips into potential savings.

A loophole will allow a local government (but not a school district) to ignore the caps if two-thirds of its governing board so chooses.

Despite these generous limits and the loophole, six Republican legislators and all but one Democrat still voted against the measure. The Democrat was Rep. Tim Melton, D-Auburn Hills, who has since chosen to leave the Legislature to accept a position in the education reform organization StudentsFirst. Melton also was the only Democrat to vote for recently adopted reforms to the state’s teacher tenure law.

Mackinac Center research has shown that the state could save $5.7 billion annually by bringing government benefits in line with private-sector averages. The cost of those benefits has risen 25 percent since 2000, after adjusting for inflation, even as average incomes for Michigan taxpayers fell by 20 percent. In short, while households and small businesses struggled, those employed by government were protected.

Some $2.2 billion of that $5.7 billion in potential savings would come from reducing government and public school employee health insurance benefits, with the rest coming from retirement benefits, paid-leave programs and other perks. Since the new law does not apply to all government employers (including the state itself and public universities), and because of its loophole and overly generous caps, the savings are likely to amount to around $1 billion when fully implemented.

Still, even in Lansing — let alone your town and local school district — that’s real money. The savings won’t be spread evenly, however. Schools and local governments that currently have the most expensive benefits will realize the greatest savings. And while these savings won’t go directly into taxpayers’ pockets, residents are likely to see fewer of those false choices to “raise taxes or cut services” in the future.

The new law will fix a portion of Michigan’s government and school overspending crisis, but clearly there’s more work to be done, especially in the area of generous public-sector retirement benefits. Nevertheless, this is a solid step toward bringing benefits into balance, and given the intense opposition of politically powerful government and school employee unions, lawmakers should be congratulated for taking it.

James Hohman is assistant director of fiscal policy at the Mackinac Center for Public Policy, a research and educational institute headquartered in Midland. Mich. Permission to reprint in whole or in part is hereby granted, provided that the author and the Center are properly cited.