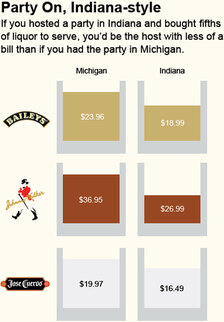 (Editor’s note: A version of this commentary appeared in the Detroit Free Press on July 31, 2011.)

The state of Michigan maintains a so-called “three-tier” liquor distribution system that erects legal walls between suppliers, state-level wholesaler and retailers. This arcane system drives up the cost to consumers by limiting competition without necessarily making any contribution to public safety.

The system was created after Prohibition ended in 1933, ostensibly to curb potential distribution and sales abuses. Today it’s merely a tool used by a handful of politically powerful beneficiaries to tap consumer pocketbooks. Specifically, the system appears to have been captured by the private, for-profit second tier — beer and wine wholesalers — who enjoy monopoly profits and limited competition. For reasons of economic efficiency and just plain fairness, the Legislature should dismantle this dysfunctional system.

These laws are bad for consumers and taxpayers, but good for the handful of wholesalers who spend big bucks on lobbying and campaign contributions to protect their privileges.

A logical first step would be to end the bizarre system in which the state is the wholesaler for all distilled liquor, and tacks on a 65 percent markup before applying an array of other taxes. Some recent “field research” by this author discovered many identical liquor products selling at a Meijer in Angola, Ind., — where the state does not act as wholesaler nor impose minimum shelf prices — at costs of more than 20 percent lower compared to a Meijer in Coldwater, Mich.

Michigan’s protection of regional beer and wine distribution monopolies should also be dismantled. Unlike distilled spirits, state government is not the wholesaler for beer and wine, but it is complicit in artificially driving up prices by legally restricting wholesaling and distribution to a handful of family owned businesses that have become rich by exploiting territorial monopolies granted by the state.

According to a House Fiscal Agency analysis of the 1976 law that granted these privileged beneficiaries their beer monopolies, the rationale was that “… retailers may ask for unfair discounts for [sic] competing wholesalers in order to get the best deal possible.” The report failed to note how competition was unfair to consumers.

In 1986, the Legislature granted similar distribution monopolies for wine, with some minor exceptions. Gongwer News Service at the time reported this as “a concession granted to the Michigan Beer and Wine Wholesalers in negotiations with legislators,” apparently to obtain support for a wine cooler bottle deposit bill.

Another law protecting beer and wine monopolists from competition is commonly known as “post and hold.” In 1979, the Legislature first adopted such a measure for beer. This law requires wholesalers to announce — or post — any price changes in advance and hold those prices for a length of time, in the case of beer for 180 days. In effect, the law makes it easier for wholesalers to legally collude to the detriment of consumers. A similar stipulation for wine also exists.

All these anti-consumer laws should be repealed. Scholars James C. Cooper of the Federal Trade Commission and Joshua D. Wright of George Mason University co-authored a paper in 2010 that statistically demonstrated what any reasonable layperson might predict: that such “post and hold” laws result in dramatically higher prices. Specifically, prices for a representative six-pack of beer were estimated to increase 12 percent to 30 percent; a bottle of wine from 6.4 percent to 18 percent and distilled spirits from 9 percent to 32 percent.

Despite the fact that this law hikes prices, the authors found “no measurable effect” on drunk driving or underage drinking. If a state wants to suppress consumption by increasing the price, it can do so by imposing a simple excise tax — something Michigan already does.

These laws are bad for consumers and taxpayers, but good for the handful of wholesalers who spend big bucks on lobbying and campaign contributions to protect their privileges. Busting this cozy relationship between lawmakers and monopolists is long overdue. The next time your family shops for a nice merlot to go with dinner, or you purchase a “sixer” for the big game, make a note to ask your own state elected officials how much they received from beer and wine monopolists in the last election campaign.