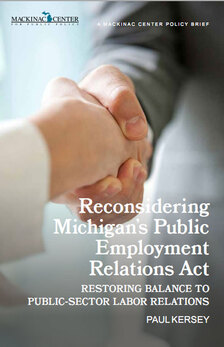 For a thorough examination of Michigan’s Public Employment Relations Act and the author’s recommendations on how to fix it, please see www.mackinac.org/14565.

Watching the Legislature tackle public-sector labor relations is a lot like watching a bomb squad at work: slowly, painstakingly picking out wires and nervously cutting them, hoping they don’t trigger an explosion.

The caution is understandable; under Michigan’s Public Employment Relations Act, government employee unions have built powerful political machines based on collective bargaining authority and massive amounts of cash. But perhaps lawmakers have made this process more complicated than it has to be. Sometimes the best thing to do with a bomb is to cart if off to an empty field where you can blow it up.

To defuse the situation — and the continuous threat to taxpayers — the Legislature could outlaw collective bargaining in local governments and school districts.

Over the last several months, lawmakers have made a series of changes to public-sector collective bargaining. Some, like changes to the emergency financial manager law that allow union contracts for insolvent cities, counties and school districts to be set aside, are likely to have a positive effect. Others, like the watered-down changes to the binding arbitration law, may have no impact.

Politically the situation is, well, explosive. PERA has created powerful government employee unions that have used their position as bargaining representatives for police officers, firefighters, teachers, clerks and a host of other government employees to influence how government in Michigan functions. Up until very recently, if a school district wanted to let go of ineffective teachers, it would have to be ready to negotiate evaluations and assignments with a union that would almost always insist on strict seniority and a clumsy evaluation process that made it difficult even to identify bad teachers, let alone get them out of classrooms.

New changes to the teacher tenure law should give districts more leeway — tenure will be harder to get, and easier to lose, and layoffs should no longer be done by seniority. But to make all this work, the Legislature also had to change the bargaining law, taking these actions off the collective bargaining table so that districts wouldn’t be pressured into negotiating away their power to identify and let go of bad teachers. The Michigan Education Association, the state’s largest teachers union, is displeased and threatening to recall legislators who voted in favor of the new tenure law.

Which gets us to the other dangerous part of PERA: the millions of dollars in mandatory union dues payments — money that is basically guaranteed to unions by government officials with little or no accountability for how it is used. In a typical year the MEA receives more than $60 million in forced dues. Based on its financial reports, we estimate that only about a third of the MEA’s budget goes into workplace representation.

So for all their caution, lawmakers still will have to confront a union with the means and the motivation to strike back at those who seek to make schools better at teaching students. A host of other unions can make similar threats to lawmakers who attempt to make other government services less costly and more productive.

All the tinkering has still left us with a powerful union establishment that is capable of doing great damage, just waiting for something to set it off. To defuse the situation — and the continuous threat to taxpayers — the Legislature could outlaw collective bargaining in local governments and school districts. There is no need to maintain a union establishment that has become a menace to education and good government in general.

There’s a strong case to be made that carefully calibrated half-measures will do more damage than a straightforward approach to public-sector unions like repealing PERA outright or cutting off unions’ dues funds. Union officials are going to lash out either way, so policymakers may as well fix things so that next time unions decide to target lawmakers, they do it with funds they raised themselves rather than mandatory dues handed over by local school districts. Blow PERA up, one time, and know that when it’s over, it won’t blow up again.

Paul Kersey is director of labor policy at the Mackinac Center for Public Policy, a research and educational institute headquartered in Midland, Mich. Permission to reprint in whole or in part is hereby granted, provided that the author the Center are properly cited.