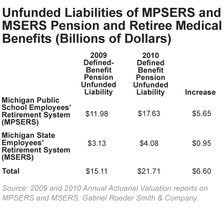 Michigan legislators have been justifiably toasting successful tax reforms, a balanced budget and the ability of emergency financial managers to fix stressed municipalities. A sobering state pension crisis, however, means that now it’s time to cork the champagne.

Last year alone, Michigan racked up $6.6 billion in new unfunded liability in the school and state employee pension systems, the equivalent of nearly $700 per resident. Pension promises are bleeding public schools, the state and taxpayers, and without reform the bloodletting won’t end.

The state should close the school employee pension system to new hires, just as it did with new state employees beginning in 1997, and instead place them in a defined-contribution system.

The latest actuarial reports show a $21.7 billion gap between how much the state has set aside to cover its pension promises and the amount it will likely need to fulfill them. This is $6.6 billion more than last year’s $15.1 billion gap.

Next year, school districts may have to kick-in more than 12.5 percent of every covered employee’s pay just to make up the shortfall. This is in addition to the amount needed to cover an additional employee-year of accrued pension benefits and retiree health benefits.

The growing expense of paying for the benefits earned by someone else has caused some school districts to try contracting out more of what they do. Sometimes districts are employing workers to do the same job at the same pay scale, but can save money because a contractor’s employees won’t belong to the expensive defined-benefit pension system.

Adding to the problem, the state has also been kicking even more costs down the road. The state’s problems go beyond making bad assumptions about investment returns and mortality to simply not making the contributions required of it. In the past decade, the state missed its catch-up payments by $1.5 billion, adding directly to the unfunded problem.

On top of that, state policymakers offered an early retirement incentive to school employees last year, increasing the state’s retirement costs by another $1.05 billion. Gradually paying down that gap won’t begin until next year.

The state’s decision in 2007 to mark its investments to the market level didn’t help, either. These investments are usually recorded at their five-year running average, so that market fluctuations don’t cause required annual pension contributions to spike. Suspending that practice when stocks had been rallying allowed the state to pay less in contributions that year, but when the market tanked in 2008, the state’s contributions jumped.

Policymakers should stop pushing these costs to the future. The state has to balance the promises that it made to retirees, the benefits already earned by current employees, and the demands it is making of taxpayers and school districts. It can do this with serious reform.

The state Constitution is unambiguous that the pension benefits government and school employees accrue each year must be paid, though this does not apply to retiree health benefits. Because of all these past abuses, the state and school districts already must allocate a far greater portion of payroll (more than 25 percent in total) than the average private-sector employer (5 to 7 percent) to make good on the retirement benefits offered to employees.

That 25 percent of payroll cost includes the aforementioned optional retiree health benefits. Trimming (or eliminating) this benefit and using the savings to catch up on the amount needed to cover mandatory pension promises is an obvious first step toward reform. Those post-retirement health benefits are all but nonexistent in the private sector, and in any event government and school retirees all qualify for Medicare at age 65 just like everyone else.

In addition, the state should close the school employee pension system to new hires — just as it did with new state employees beginning in 1997 — and instead place them in a defined-contribution system. A recent Mackinac Center study showed that the 1997 reform has already avoided the accumulation of $2.3 billion to $4.3 billion in new unfunded liabilities since then.

Legislators have already been inching closer to closing the system with last year’s “hybrid” reforms, and are considering retiree health care yet again this year. Regardless of the politically preferred reform that results, the state needs to get these costs down before they harm more schools and taxpayers.