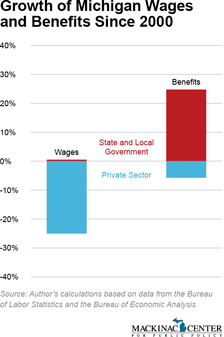 (Note: This article initially contained a minor error in the wages and benefits calculations. In addition, the Bureau of Economic Analysis has released new data and revised previous data. The figures have been corrected and updated.)

Recent public-sector union protests in Ohio and Wisconsin captured headlines, but have not yet occurred on the same scale in Michigan. Gov. Rick Snyder is trying to get cooperation from labor leaders to prevent this conflict, but he’s also taken a bold stand on government employee compensation in his executive budget. Considering that employment costs are a primary reason why government spending continues to grow, this is a commendable move.

An Open Government Employment Law would allow local employees to decide whether or not the union has earned their support and end taxpayer support for union politics.

Unlike our Midwestern neighbors, Gov. Snyder is not targeting unionization, but rather is targeting its effect of protecting and increasing compensation regardless of government’s ability to pay. In the past decade, Michigan’s public-sector compensation gained on average while the private sector shrank. Wages fell in the private sector by 25 percent while the value of benefits fell 6 percent. It’s been almost the exact opposite in the public sector. Wages increased 1 percent, while the value of a benefits package increased a substantial 25 percent.

To get employment costs under control, the budget calls for a couple of changes, including $180 million in employee concessions with the state government’s unions. While there are fewer state employees, increased employment costs negated all of the net savings of a smaller workforce. According to the Michigan Department of Civil Service, there were 54,866 full-time equivalent employees in 2003, and their total costs were $3.8 billion. This had grown to $4.7 billion in fiscal 2010, a massive gain, despite an 8 percent drop in FTEs.

Meanwhile, state and local governments largely refused to reform this benefit. The Mackinac Center’s analysis of teacher health insurance coverage offered by every Michigan school district shows that nearly half of Michigan’s school districts do not have any form of premium sharing. And for the others that do, the average percent that teachers contribute is only 5 percent.

While the governor called for prefunding the state’s health care benefits for retirees, the budget also recommends reducing the benefit. Providing health insurance benefits to retirees costs more than $1 billion a year for state and school employees. It’s also a benefit that is rare in the private sector. An analysis of 25 major Michigan employers found that only two of these major companies offered any retiree health benefits. The recommended actions indicate that offering retiree health care is a fiscal problem that needs to be addressed.

Overall, Gov. Snyder recognizes employment costs at all levels of government need to be addressed and nudges all governments to fix these problems. There is more that can be done to equip local governments with the tools to lower government expenses without harming services.

The biggest piece of assistance that the state can offer local governments is to change unionization rules. This can have a huge fiscal impact, because 60 percent of Michigan’s government workforce is unionized. But the people that have been elected to serve the public interest — the school board members, trustees, council members, and others — should have the freedom to walk away from union negotiations if they want to.

Likewise, governments should stop being tax collectors for union dues. Right now, nearly every government union’s dues are paid for via payroll deductions as part of union contracts. But paying for union representation should be a private matter between employees and their union.  An Open Government Employment Law would allow local employees to decide whether or not the union has earned their support and end taxpayer support for union politics.

The governor’s reforms begin to address the growing disparity between public and private employees at all levels of government in Michigan. But this only broaches the subject of bringing benefits in balance. There’s a lot more that needs to be done.

James Hohman is a fiscal policy analyst and Paul Kersey is director of labor policy at the Mackinac Center for Public Policy, a research and educational institute headquartered in Midland, Mich. Permission to reprint in whole or in part is hereby granted, provided that the author and the Center are properly cited.