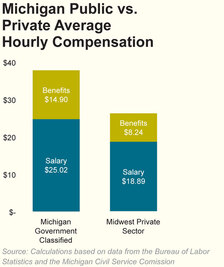 This comparison shows the inequity between public sector and private-sector employees for overall compensation.

There’s a way to save Michigan taxpayers $5.7 billion without cutting a single program, eliminating any government job or touching public wages. That’s more than enough to balance the state’s budget, repeal the Michigan Business Tax, fix Michigan’s roads and still have money left over. Michigan can do all this through government employee perks parity.

Compensation comes from wages and benefits like paid leave, employer-paid retirement contributions, health insurance and other benefits. In recent years, the cost of these benefits in the public sector has exploded while the private sector has been getting them under control.

Michigan's taxpayers can no longer afford to pay for public-sector benefits that far outpace their own.

Government workers at all levels — whether they’re state bureaucrats or public school teachers — tend to receive a more costly benefits package than private-sector workers. State and local governments simply don’t face the same competitive pressures that are necessary to control their labor costs. Government also has high rates of unionization — 60 percent in the public sector compared to just 13 percent in Michigan’s private sector — that press governments to spend all they can on employee compensation.

Some benefits, like pensions for state and school employees, are protected under state law, making them even more challenging to reform.

But Michigan’s taxpayers can no longer afford to pay for public-sector benefits that far outpace their own. The state should pass a law mandating that state and local government benefits do not exceed private-sector averages. In order to enforce this, the Legislature should create a special commission that is given the power to alter public-sector employee benefits. The commission would offer its services to any municipality or school district that requests its services. This, by itself, is likely to stave off the possibility of municipal bankruptcy since employment costs are responsible for driving municipalities to the brink of insolvency. While it’s possible for municipal governments to offer services by their employees at fair rates for taxpayers, a panel like this would offer local leaders another tool to control their finances.

The state should be the first to turn to this commission for assistance. The overall benefits package for state civil servants cost taxpayers approximately $1.7 billion in the previous fiscal year. The state should be able to save roughly $708 million per year if that package was adjusted to private-sector averages.

Government schools and local municipalities contain the rest of the potential savings from benefits parity. Public school employee benefits are $2.5 billion above the private sector. Through revenue sharing, the school aid fund, or direct appropriations, local governments have relied on the state to help pay for this disparity.

As the savings materialize, Michigan can start using them to make some important policy changes. The state should first balance its budget, as required by the state Constitution. Benefits parity will also pay off in future budgets by providing large savings as they are accomplished and through smaller annual increases in subsequent years.

Next, the state should eliminate the Michigan Business Tax. By saving money on benefits, the state would not require the $2 billion in revenue from this tax. Eliminating it would make Michigan a more attractive place to do business.

Finally, it’s no secret that Michigan’s roads are in bad shape. Michigan should spend the remainder of this savings on improving roads and highways, instead of increasing the gas tax. Spending the accumulated savings of benefits reforms on the roads allows Michigan to fill up potholes without dinging taxpayers at the pump.

These three items will help the state balance its books, make it attractive to economic growth and produce much-needed repairs to state infrastructure. This can be accomplished without furloughs, layoffs, or cutting back on state programs and entitlements. It only requires bringing public benefits into balance.

James Hohman is a fiscal policy analyst at the Mackinac Center for Public Policy, a research and educational institute headquartered in Midland, Mich. Permission to reprint in whole or in part is hereby granted, provided that the author and the Center are properly cited.