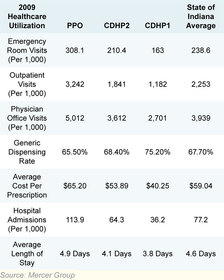 New Michigan Gov. Rick Snyder has cited Indiana Gov. Mitch Daniels as a model because of the Hoosier’s business-like approach to state government. One of the business-like practices Indiana has adopted is placing government employees in consumer-driven health plans (CDHPs).

The most common CDHP, a health savings account, pairs a high-deductible insurance policy with a tax-advantaged savings account. HSAs are increasingly common in private-sector workplaces, and even some Michigan local governments have adopted them — as has the Mackinac Center for Public Policy. Recent research by Center analysts estimates that placing state and school employees in HSAs could save taxpayers roughly $32 billion through 2021.

Savings in the first year could amount to $106 million, with accrued savings of nearly $6 billion through 2021.

In 2005, Gov. Daniels offered HSAs to state employees as one option among competing health care plans. Choosing an HSA was voluntary and popular. In 2010, 70 percent of the state’s entire workforce of 30,000 had made this selection; when the 2009 final numbers are completed, the program is projected to have saved taxpayers $20 million. The benefits don’t end there, however.

The state of Indiana pays 100 percent of the premiums for the health insurance portion of the plan, and also deposits an amount equal to 55 percent of the employees’ annual deductibles into each employee’s tax-free savings account. Employees can make additional tax-free deposits, and withdrawals are not taxed provided they are spent on health-related purchases. Any interest on assets held in the accounts is tax free too, so they are thrice-blessed.

The Mercer Group, a management consulting company, reports that through September 2009, Indiana state employees had accumulated positive HSA account balances of $28.1 million. This occurred during a time of budget austerity when state employee pay was frozen. Note too that these HSA accounts are the property of the employees; should the employee leave for any reason the assets go with him or her, rather than revert to the employer.

One of the knocks leveled against HSAs is the mistaken belief that people will under-consume preventive health care services and pocket the money. Aside from the elitist presumption that someone else knows more about any particular individual’s needs, the criticism ignores the fact that most plans include check-ups and some other preventative services at no charge to the employee.

In 2009, Mackinac Center scholar James Porterfield, an HSA expert, calculated that if this state’s classified civil service employees were placed into CDHPs, the savings in the first year could amount to $106 million, with accrued savings of nearly $6 billion through 2021.

Those estimates may be conservative. Porterfield assumed that the state would annually pay 75 percent of employee deductibles and 100 percent of the insurance premium, but Michigan’s plan need not be that generous. Again, the state of Indiana only pays 55 percent of its employees’ deductibles.

If Michigan also included public school employees in a state HSA system, our estimates indicate that the state could save $451 million in its first full-year and an additional $26 billion through 2021.

Like Gov. Daniels, Gov.  Snyder comes from a business background, and is on the hunt for reasonable cost-saving proposals for the state. He and his administration would be hard pressed to find one better than employee HSAs. They have a well-established history of success in the private sector, are championed by a governor Mr. Snyder admires, offer the promise of billions of dollars in savings for Michigan taxpayers and produce satisfied employees. Health savings accounts would be a win-win for everyone involved.