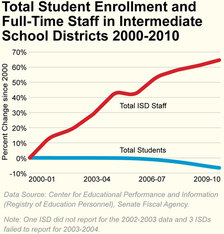 The number of employees for each student in Michigan’s public school system has been rising for most of the past 15 years, and now stands at one employee for every eight students. This is surprising, given Michigan’s declining economy over the last decade and the school establishment’s perpetual complaints of being underfunded. But even more startling trends emerge when the data are dissected further.

Between 2000 and 2009, enrollment in all of the state’s public schools declined by 6.4 percent. However, as illustrated by the accompanying chart, the number of full-time staff on intermediate school districts’ payrolls grew by 64 percent, according to data providing by the Michigan Department of Education’s Center for Educational Performance and Information. ISDs are government entities that were created in 1962 to provide services like accounting, auditing and professional development to local school districts. They can also raise funds for special and vocational education services. There are 57 ISDs in Michigan.

In contrast to these trends, staffing at charter schools appears much leaner.

It should be noted that the reporting requirements and methods for ISD staff changed at least two different times over this period, so some of this growth may be attributable to these modifications. Some ISDs also failed to report in certain years. Unfortunately, the Center for Educational Performance and Information is the only source for this data, and these multiple changes and some ISDs’ reporting failures make it difficult to draw certain conclusions. Regardless of what report or time period is used, however, the data show that overall ISD payrolls grew even as pupil enrollment declined.

Unlike conventional school districts, where funding levels are tied to the number of students who attend each year, ISDs derive much of their revenue from local property taxes. When the housing bubble was inflating, along with property tax assessments, local millage revenue funneled ever more cash into ISD coffers regardless of whether enrollment in their constituent school districts was rising or falling. This allowed them to hire more employees.

In fact, recent records of ISD revenues demonstrate this funding arrangement. CEPI shows that local revenue for ISDs increased by 47 percent from fiscal 2004 to fiscal 2009, outpacing revenue increases from both state and federal sources. Altogether, ISDs received 37 percent more in 2009 than in 2004. For comparison, total revenues for local districts increased by 10 percent over that same period.

One of the main drivers of the increase in ISD funds came through revenues earmarked for special education services. These revenues increased at the same rate as overall revenues from fiscal 2004 to 2009 — 37 percent. Yet, full-time equivalent special education enrollments at ISDs increased by only 8 percent.

The growth of ISD payrolls could be a result of the transfer of some operations from local schools to the ISD level. This would be in keeping with the original intent of ISDs — to create cost-saving economies-of-scale and consolidate services. If this is what has been happening, then one would expect to see a corresponding decline in staff levels at the local district level.

That’s not the case, however. Student enrollment in local districts has fallen by 9.8 percent since 2000, while their full-time staff numbers are down 8.5 percent. These figures do not suggest any significant transfer of services to the ISDs.

In contrast to these trends, staffing at charter public schools appears much leaner. From 2000 to 2009 their student enrollment increased by 97 percent, while the number of staff grew by just 79 percent. Unlike ISDs, most charter school funding is tied almost exclusively to the number of students — not property tax receipts — so operating efficiently and avoiding a glut of non-essential employees is critical to their success.

ISDs will claim correctly that over this period the Legislature has given them more duties to perform, which would account for some marginal increases in overall staff levels. However, the very large increases suggest that something else is going on, and that a cash-strapped state should re-examine the role of this middle level of school management. Rather than creating efficiencies and economies-of-scale, ISDs may have become what they were intended to alleviate — excessive layers of bureaucracy.